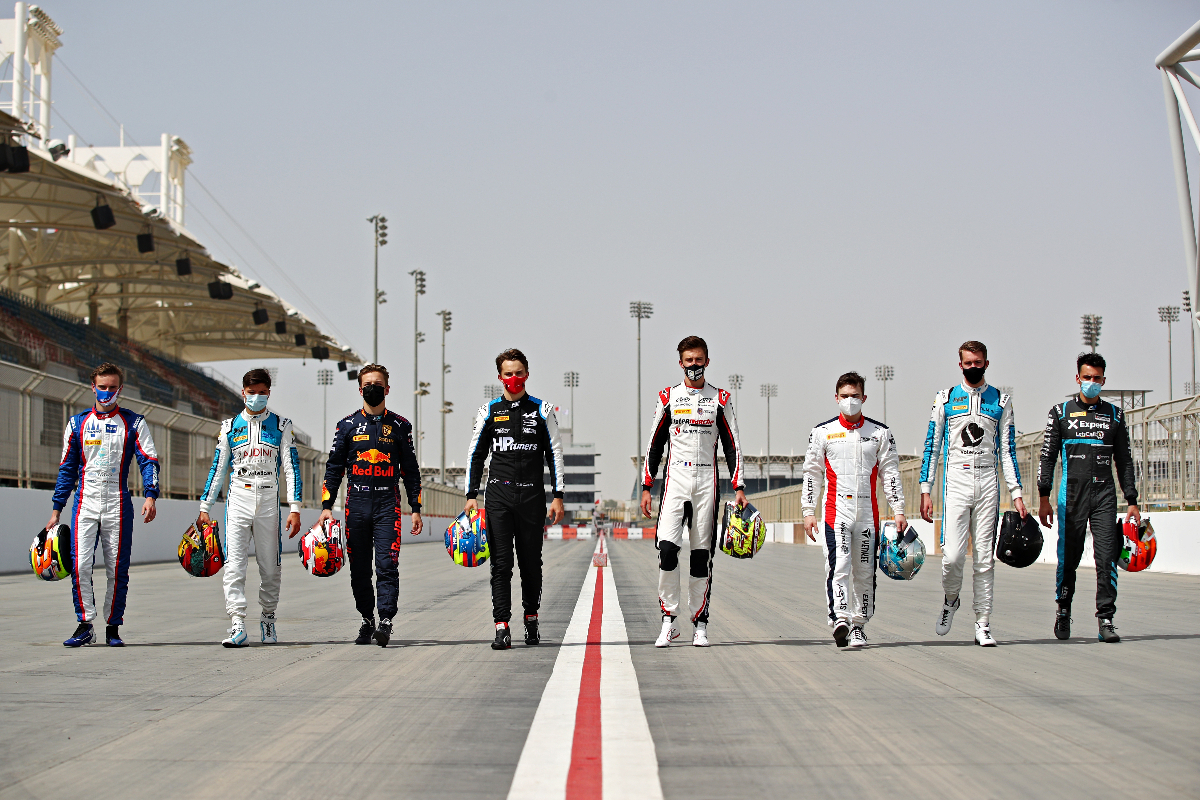 Formula 2’s season opener and its pre-season test both took place in Bahrain, but looked very different when it came to who set the pace. Formula Scout delves into the data from the first three races of 2021

A combination of night and day races, as well as safety cars, virtual safety car periods and winds kicking up lots of sand meant there was a huge variety of conditions that Formula 2 drivers faced in last month’s season opener on Bahrain’s highly abrasive asphalt, and it’s probably the closest we’re going to get to seeing the pecking order of the teams until the second half of July when the championship visits Silverstone.

The interruptions to green flag action limited the amount of meaningful data that could be taken from long runs in the first sprint race of the weekend, which took place in such hot conditions that it became a worry for internal components such as the turbocharger as well as the Pirelli tyres, but the night-time second sprint and Sunday’s feature race each featured enough racing that the pace of each team on high and low fuel, and soft and hard compound tyres, could be assessed.

Starting with qualifying, the absolute fastest pace achieved by any team was the pole lap of Virtuosi Racing’s Guanyu Zhou. The Chinese driver set a 1m42.848s that unsurprisingly continued from where his team left off in 2020 as the best on one-lap pace. The order behind was not too different to the visit to Bahrain at the end of last year, with MP Motorsport and Carlin some way back in third and fourth, but with ART Grand Prix now in second thanks to a huge lap from Christian Lundgaard.

The Dane and team-mate Theo Pourchaire were concerned about their pace at the circuit last year, and improving qualifying was one of the main focuses over winter. Lundgaard was comfortably fastest when the paddock returned for pre-season testing, while Virtuosi never seemed to really show its true pace, and it’s now been proven that ART is alongside it at the front.

Qualifying simultaneously will be of greater and less importance now, with less points available and more reversed-grid races, but more street races too, and Mick Schumacher proved in 2020 that you don’t need to be a fast qualifier to be champion.

Still, being able to push a car to its limit on low fuel is not just integral for qualifying but what helps you win too, as witnessed in the Bahrain feature race when Zhou and Carlin’s Dan Ticktum put on the faster soft compound tyre for their second stint and as a result came first and second after moving up the order in the closing laps.

However, it was Prema’s Robert Shwartzman who bettered both to be fastest on long-run pace using the soft, as an early penalty meant he had cleaner air after making his pitstop to change tyres and his average laptime was an astonishing 1m47.330s, which through a combination of factors was a pace achieved not even once in a race by the DAMS drivers and some others frontrunners including Virtuosi’s Felipe Drugovich, Hitech GP’s Liam Lawson and MP Motorsport’s Lirim Zendeli.

In part this was down to strategy, as Drugovich ran the hard tyre in the second sprint race and like DAMS’ Marcus Armstrong also finished the feature race on the compound. From Formula Scout’s calculations, there was a 0.6 seconds per lap advantage for the soft on low fuel.

But this was also down to limited running, with Armstrong’s team-mate Roy Nissany for example having a messy weekend that meant the only stint he recorded on the faster compound was in sprint race two but with a fuel tank that was at least half-filled, and he didn’t do a race run at all on the hard tyre.

The story doesn’t end there for those two drivers, with their overall pace deficit (DAMS was the ninth fastest team in qualifying) far more evidential to one specific issue.

Through 2020, DAMS struggled to warm up the tyres quickly – particularly the soft – and this hurt its results in qualifying, and races punctuated with safety cars where its cars couldn’t make progress on restarts. The flipside of that was that while it took a long time to get the rubber as close to its peak operating window as possible, it then had that performance later into stints than its rivals and as a result had one of the quickest race cars. 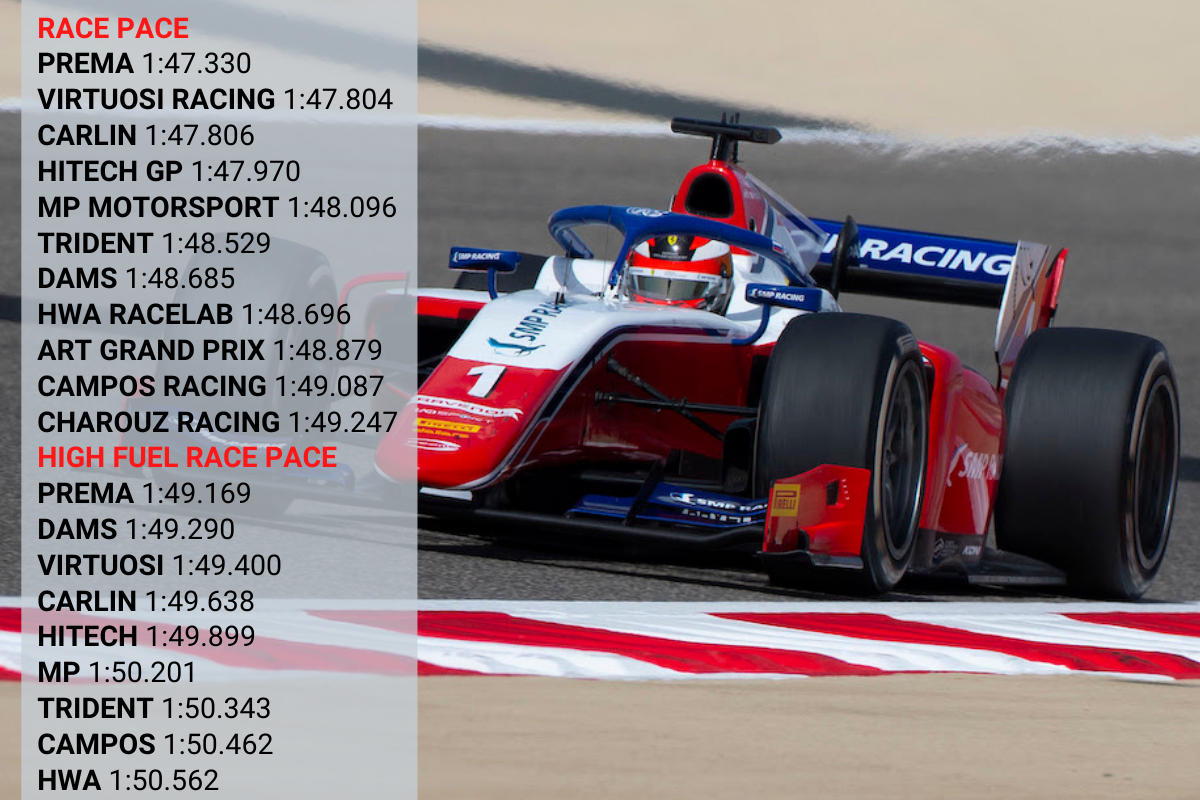 In Bahrain, Armstrong said “we had very positive long run pace, especially on soft tyres”, while his team manager Francois Sicard confirmed suspicions that its 2020 struggle hadn’t been put behind it, stating “unfortunately, our tyre warm-up hasn’t been strong enough and that has been extremely detrimental to our performance”.

As it turned out, Armstrong actually had a faster average race pace on the hard tyre than the soft and was third-fastest on that compound compared to ninth on the soft.

Prema’s Oscar Piastri was fastest of everyone on the hard, with his stint on that tyre only bettered by team-mate Shwartzman and the four victory contenders who switched to the soft in the feature race, and he led Armstrong on being the quickest driver on a high fuel load. Charouz Racing System had topped the race pace calculations in testing with David Beckmann, but his best efforts couldn’t even match Prema’s full tank pace during the race weekend.

Formula Scout estimated the gap between the compounds to be around 0.4s per lap on high fuel after examining all of the data, although it was hard to quantify the effect of the track rubbering in over the weekend as well as that of desert sands being blown onto the track later on.

Much of that sand appeared at Turn 1, as evidenced in the Formula 1 sessions where the higher entry speeds meant the tyres were more prone to wheelspin than F2, but with that in mind it builds an even more encouraging picture for Prema as Piastri repeatedly made passes at that corner and with a car that never looked like it needed corrections.

His confidence there ended up being his undoing in the feature race, as holding out on the outside against Ticktum resulted in contact, a spin and stall that ended his race. But few drivers looked really comfortable flinging their way into the Turn 1 hairpin and then the quick left-right that followed on high or low fuel, or on fresh or ageing tyres, bar Piastri.

Where else do the numbers point towards an encouraging trend but don’t quite tell the full picture?

ART GP was rapid in qualifying and the races, but left Bahrain with a single podium and as the victim of another reliability problem with the Dallara F2 2018. The team was another to start on the softs and finish on the hards, and used the softs for such a short time that a truly accurate picture of its race pace on the tyre is difficult to build. Lundgaard did enough laps to position his pace to similar to that of Piastri, but Pourchaire’s small sample put his estimated pace at the very bottom.

It’s tricky to unthread Virtuosi’s picture too, as Drugovich was the only driver to record a clean long run in the first sprint race but was somehow messy enough after that to end up being one of the slowest on the soft tyre.

Zhou meanwhile was the only driver to get two of his stints in the top 10 of the weekend, and on different fuel loads too. Combining the races, qualifying and the sole free practice session, Virtuosi set more laps than anyone else. But will those laps be useful for what’s next?

As F2 didn’t visit Monaco or Baku last year, nobody knows what laptimes are going to be like on the 18-inch wheel rims when the series heads to the streets for its next two rounds. Drivers have often said that when the larger wheels were introduced in 2020 the car became slightly slower to react due to the increased weight, and the weight’s position on the car, especially in those moments that require the kind of precise and fast inputs that Monaco in particular demands.

That will make a difference when drivers are searching for the limit but yet to figure out where it lies, which might come in every session in Monaco due to the track evolution, and most likely will mean those who need to make a snap correction will be even more likely to crash than before such are the margins on street circuits. 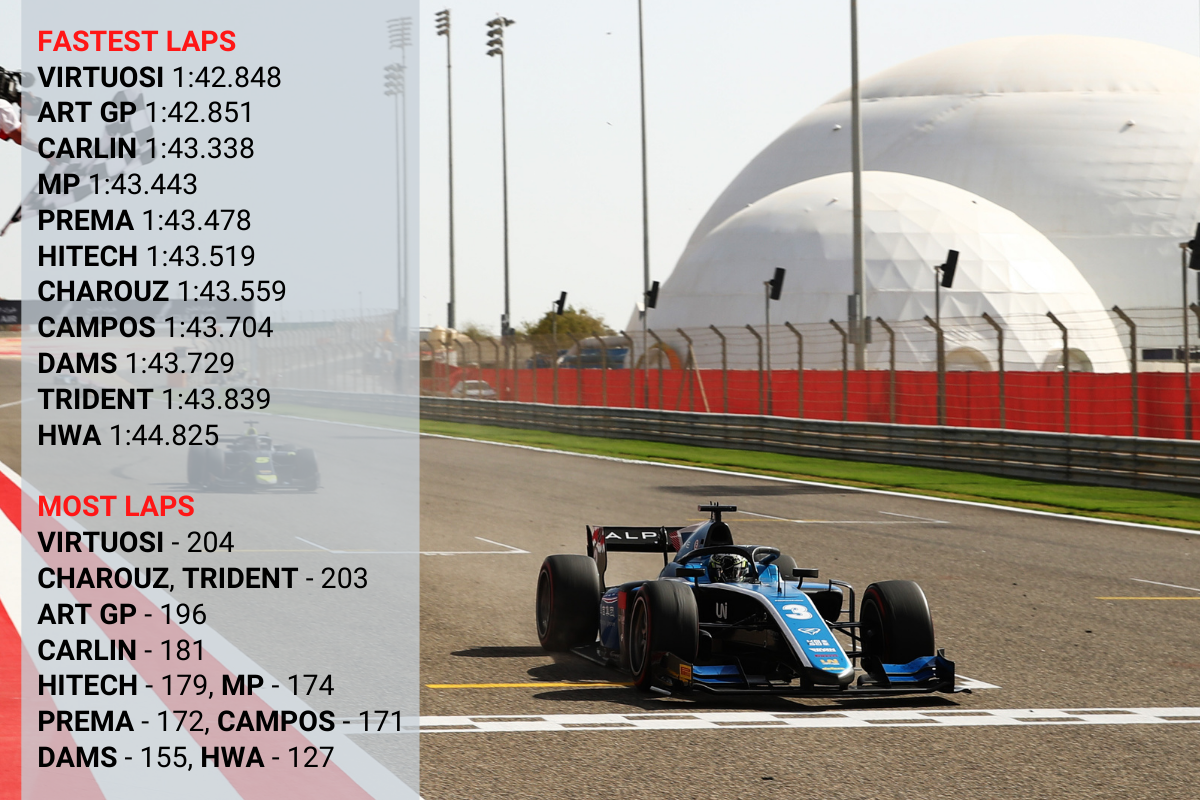 It’s the usual story at Monaco, but what makes it different this time is that a big crash in the first sprint race could now rule a driver out of the second sprint race a few hours later (should they both be condensed into the shorter Friday schedule), costing them even more experience, and penalties for crashes from those races could shake up the feature race grid. Additional disruptive elements puts even more onus on qualifying.

Pirelli will bring softer compounds to Monaco and Baku, with the supersoft likely to be used for qualifying at both. That tyre and the updated medium compound weren’t available pre-season, and the supersoft was only used in one stint of one race last year and nowhere else. And that compound is not expected to appear in this month’s Barcelona test, where the soft and hard were raced last year.

The amount of unknowns going forward not only makes it very difficult to predict almost anything about what could happen next in F2, but also means the pecking order after round one probably stands for very little besides informing teams where they need to work on before they return to track.

Some drivers will already be worried about their title ambitions, as they’re already 12.5% into the season and there are only seven more opportunities to score a full 31 points from taking victory, pole and fastest lap in a feature race.

Expected title contenders who are already more than 31 points behind championship leader Zhou include Hitech GP’s Juri Vips and Drugovich, while top returning driver Shwartzman is 25 points off the top.

Schumacher fell 55 points behind before his turnaround in form during the second half of last season, and 2018 champion George Russell was 37 off the lead at this point in his title-winning campaign. There was even greater margins overcome in GP2 in 2013 and 2009, when Nico Hulkenberg started the year off the equivalent of 70 points behind if the current system was used, and that was after two feature races and one sprint rather than with the format introduced this year.

In summary, absolutely everything is up for grabs still and Bahrain has only given us a glimpse at who is really at the front.