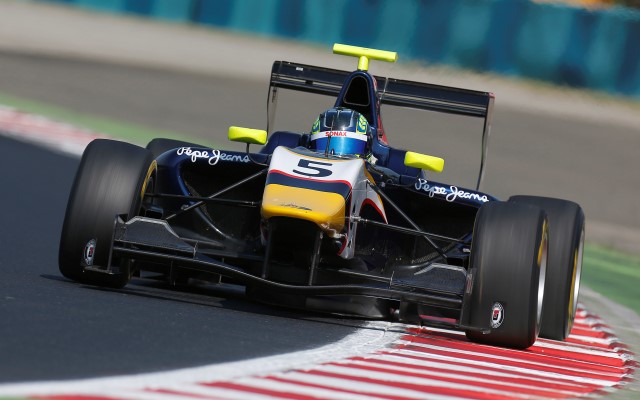 Robert Visoiu saw off team-mate Carlos Sainz to record his second reverse-grid win of the season in Hungary’s second race.

Sainz made superb start from fourth on the grid to challenge pole-sitter Visoiu into the first corner, but ran deep as the Romanian managed to stay ahead.

Visoiu had a comfortable lead wiped out by a late safety car, but he then put four seconds between himself and Sainz in the two laps of green flag racing at the end.

Sainz finished with Kevin Korjus and Facu Regalia – the two men he passed at the start – on his tail. They were followed by Jack Harvey and Giovanni Venturini, the Italian getting up from ninth to sixth on the opening lap.

Daniil Kvyat finished seventh ahead of Conor Daly, with Saturday winner Aaro Vainio missing out on points in ninth. Also missing out, for the second race in a row, was Tio Ellinas in tenth. His championship lead is now only one point over Regalia.

The safety car was brought out when Bamboo team-mates Melville McKee and Lewis Williamson tangled at turn one as the latter looked for 14th place.