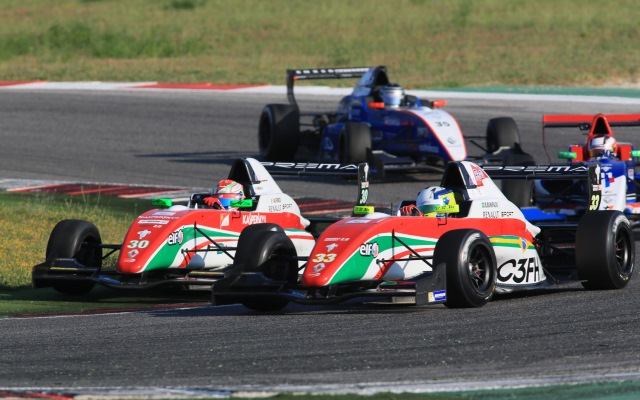 After getting pole position, Prema Powerteam?s Bruno Bonifacio got his third win of the season from lights to flag in the first race in Misano.

Bonifacio was not unchallenged, as his team mate Antonio Fuoco charged throughout the entire race, but in the end he had to settle for second place as Bonifacio stood firm and held to his lead to take his third race win of the season.

The final step of the podium was a race long battle between Kevin Joerg and Egor Orudzhev. Joerg was overtaken by Orudzhev at the start, but the two fought each other and by the end Joerg prevailed and took third place, with Orudzhev in fourth.

Fifth was for Konstantin Tereschenko, with Hans Villemi in sixth. In seventh was Simon Gachet getting his first points of the season. Eighth was Uyko Sasahara, Gregor Ramsay in ninth and completing the top ten was Matthew Solomon, getting points in his first race in the series.

?It’s been an extremely hard-fought race from start to finish,” said Bonifacio. ?I knew that Antonio was there at any corner exit, and I gave 100 %?to maintain the lead. I thank the team for the outstanding job.?