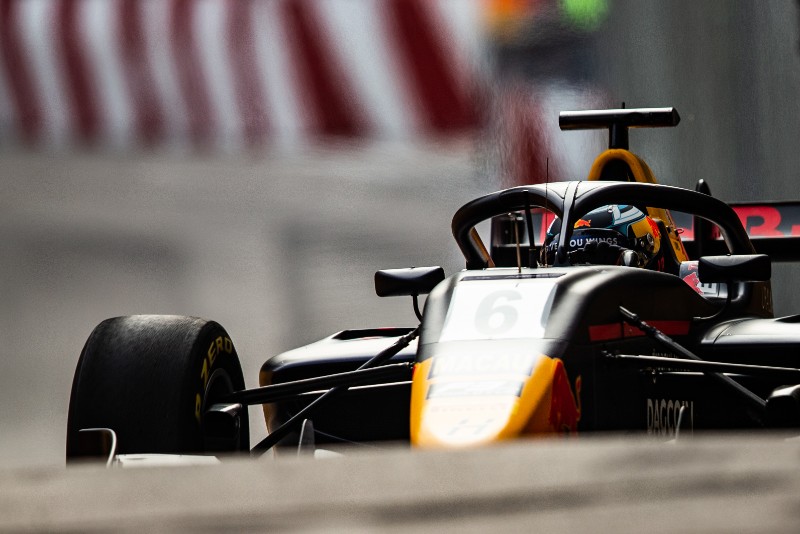 Hitech GP’s Juri Vips set the pace in the second free practice session for the Macau Grand Prix, during which reigning winner Dan Ticktum came under investigation for a crash.

It was Prema’s Robert Shwartzman, the FIA Formula 3 champion, who set the pace early on and was the first to drop into the 2m08s.

He was quickly bettered by Carlin’s Ticktum, who kept first place while double yellows waved at the Melco hairpin for over five minutes.

HWA Racelab’s Sophia Floersch had understeered at the exit of the corner and stopped just before the barriers, but while reversing out of trouble she then stalled and impeded the track for those behind.

Vips was the first to improve once the track was green again, setting the fastest time in the ‘mountain’ sector of the lap to go fastest overall. Ticktum quickly responded though, and broke into the 2m07s.

While Floersch’s car was still being hoisted away, the session was then red flagged when Ferdinand Habsburg span at Lisboa. He got going again, but by which point all the cars had already been directed back to the pits.

The session restarted with 17 minutes to go, and this time it was Vips who failed to get his tyres up to temperature and found himself facing the wrong way at Lisboa. There was no impact for the on-track action, and he was only shuffled down from second place by a flyer from Shwartzman seven minutes later.

On his last flying lap, Vips struck back with a 2m06.569s lap, half a second clear of Ilott, seconds before Trident’s David Beckmann crashed at Police Bend.

Double yellow flags were immediately waved, but Ticktum appeared to ignore them as he came through the corner at speed and ripped off the rear of his car as he clouted Beckmann. The incident is under investigation.