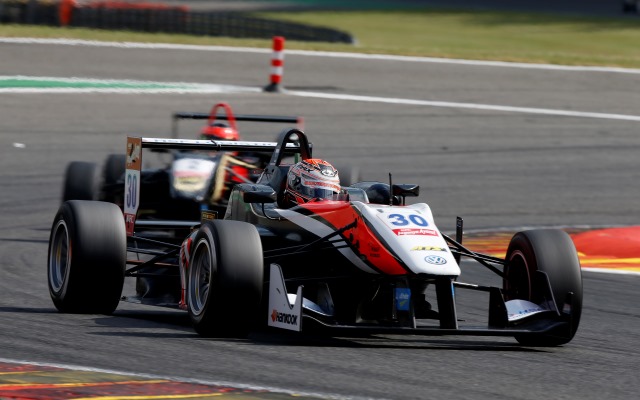 Max Verstappen became the first driver to win all three races in an FIA F3 European Championship round this season as he completed a superb treble at Spa-Francorchamps.

The 16-year-old single-seater rookie won out in a thrilling battle with championship leader Esteban Ocon.

Ocon lost the lead to John Bryant-Meisner into Les Combes for the first time, but regained the place into the Bus Stop before the end of the opening lap.

Verstappen had started fifth, but made up two places with a dive down the inside at the first corner, before moving up into second and attacking Ocon, getting past the Frenchman with a brave move at Les Combes.

After the pair banged wheels, Ocon did slipstream back past Verstappen on lap five, but Verstappen somehow held on around the outside to keep the place.

As in the weekend’s earlier two races, Verstappen had to deal with a mid-race safety car, but he made a good restart and controlled the rest of the race, albeit winning by only 0.495 seconds.

Gustavo Menezes won out in a race-long duel with Felix Serralles over third place to score his second podium of the weekend, while Nicholas Latifi just beat Tom Blomqvist out of the final corner to finish fifth.

Jake Dennis was seventh ahead of Jules Szymkowiak, Felix Rosenqvist and Jordan King, who completed a trio of tenth-place finishes for the weekend.