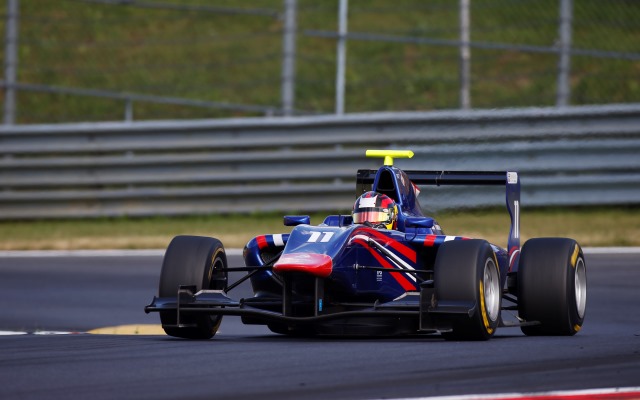 Emil Bernstorff picked up the pieces from a lap two crash ahead of him to claim victory in the second GP3 race in Austria, making it a double win for the Carlin team.

Luis Sa Silva held the lead off the reverse grid pole in his Carlin car, but was passed for the lead at turn one on lap two by Nick Yelloly.

Sa Silva reclaimed the place at turn two, and was followed past Yelloly by Matheo Tuscher. The Swiss youngster then went for the lead on Sa Silva, but he was forced on to the grass as he moved alongside, leading to contact between the pair that took both out of contention.

Yelloly was also delayed by the incident, allowing Bernstorff to nip into the lead. He quickly opened up an advantage over the rest of the field, and won by a commanding 7.7 seconds.

Richie Stanaway held second place but lacked pace as the race wore on, and as in race one he was passed by Jimmy Eriksson, who scored his third podium in four races.

Stanaway held on to finish third under late pressure from Roman de Beer who soared from 12th to fifth in the first two laps and then passed Nick Yelloly close to the end.

Jann Mardenborough was having an impressive run in sixth until he crashed out, allowing Arden team-mate Patric Niederhauser to end up sixth after passing Patrick Kujala. Dino Zamparelli took the final point in eighth, ahead of Pal Varhaug and Dean Stoneman.

Once again, race one winner Alex Lynn had a shocking race two from eighth on the grid, sustaining damage on lap one and pitting, finishing down in 20th.