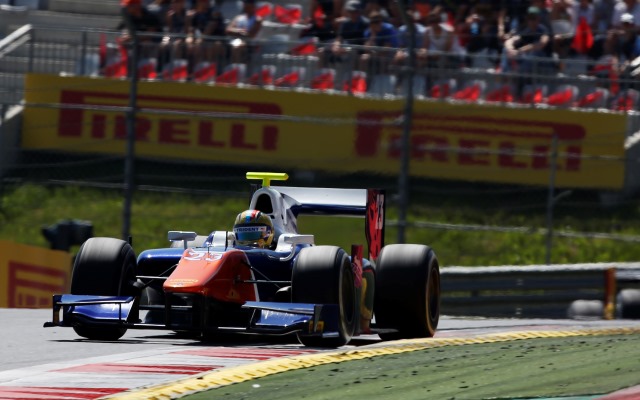 Venezuelan racer Johnny Cecotto was made to fight for his second victory of the season as he withstood severe pressure from opponents to win the GP2 sprint race at Spielberg.

Just as in yesterday’s race, front row starters Alexander Rossi and Mitch Evans struggled to get going when the lights went out, allowing third-placed Cecotto to assume the lead into turn one.

Poleman Rossi managed to hold on to second, while Evans lost positions to the Racing Engineering duo of Stefano Coletti and Raffaele Marciello. Further down the order, Takuya Izawa made contact with Felipe Nasr, which resulted in front wing damage and a subsequent black-and-orange flag for the feature race winner.

Shortly thereafter, Marciello managed to overtake his teammate Coletti and then proceeded to pull off a gutsy move on Rossi to take second. The Italian then set out after Cecotto, trailing him by just half a second after the next few laps.

However, the Italian’s race win bid would not come to fruition as he had to ease off from behind the leader and started to lose time as tyre wear proved more extreme than expected.

At that point, his teammate Coletti wound his way around the outside of a struggling Rossi into Schlossgold, with better traction allowing him to keep the position. Just one lap later, he passed Marciello into Remus.

The Monegasque then set out after Cecotto with the race now in its final laps. The Venezuelan was three seconds up the road, but Coletti made up two of those over three laps, putting in the fastest lap the race while he was at it.

Cecotto ramped up his pace in the final five laps but, with two to go, Coletti was just half a second down. He was even closer the following lap, but wasn’t allowed any overtaking chances and had to settle for second.

Marciello’s final stint was a difficult one as he struggled with tyre wear, but the Italian managed to keep a quicker Evans behind to claim his second podium of the weekend.

Despite struggling for pace, Rossi crossed the line to take a well-deserved fifth place. Championship leader Jolyon Palmer managed to make use of the American’s issues to overtake Julian Leal for sixth, but himself couldn’t find a way past the Caterham Racing car.

With Leal in seventh, Izawa rounded out the points way down the road.

Maiden pole for Janosz in Euroformula Open at Jerez