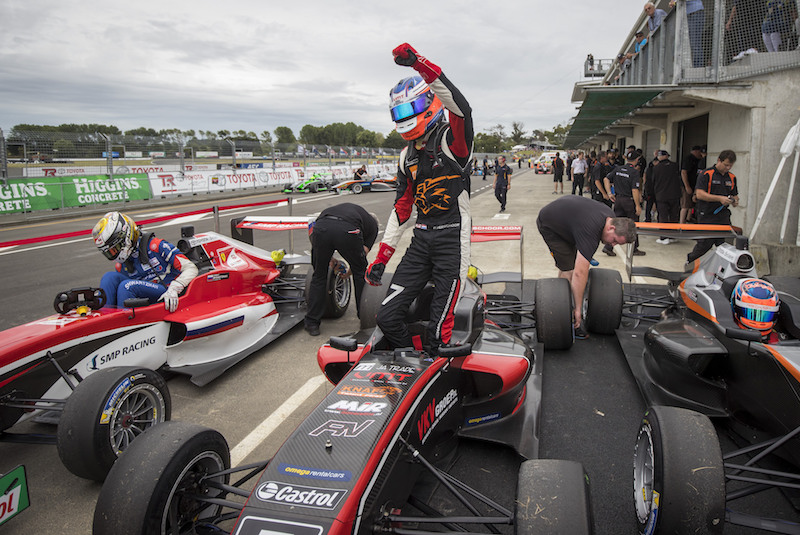 Richard Verschoor closed the gap to the top of the standings with his fifth win of the Toyota Racing Series in the opening race of the season finale.

The M2 Competition driver enjoyed a straight forward lights-to-flag victory in the first race of the weekend, finishing nearly four seconds ahead of Robert Shwartzman in second.

Championship leader Marcus Armstrong made a strong get away after a difficult qualifying put him eight on the grid. He was running fourth by the end of the first lap, though he was knocked down a position after a smooth overtake from Victory Motor Racing?s Brendon Leitch.

Armstrong tried to retake the position but Leitch put up a solid defence to hold onto fourth place. Leitch was eventually able to build a small gap to the M2 Competition driver and take the chequered flag fourth, just behind Clement Novalak.

Juan Manuel Correa ran out of laps before he could mount a serious challenge on Armstrong but finished less than a tenth of a second behind the championship leader.

Fifth place was enough for Armstrong to retain the championship lead but the gap back to Shwartzman is now just 15 points, with Verschoor 19 further behind.

After an impressive qualifying performance put him on the front row of the grid, the race got off to a disappointing start for Charles Milesi, who stalled on the grid. Those behind him managed to avoid the stranded car and he eventually get going, but Milesi could only finish 12th.

Ryan Yardley finished seventh ahead of the battling James Pull and Reid Harker. Taylor Cockerton rounded out the top 10.