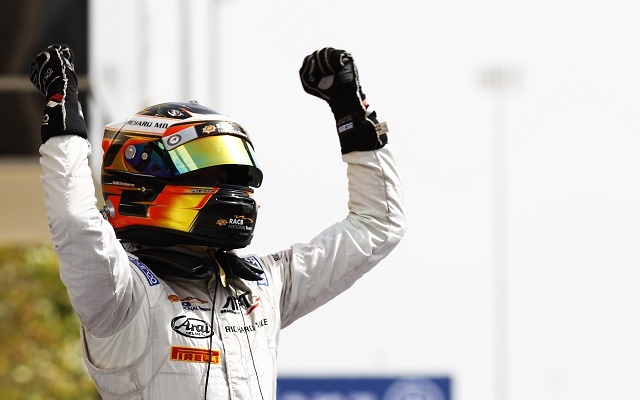 ART Grand Prix driver Stoffel Vandoorne converted pole position into a victory in the GP2 2015 season opener at Sakhir, winning the race for the second year in a row.

In spite of his dominance in qualifying, Vandoorne’s path to the win was all but straightforward as the Belgian had to fight through the field on a risky strategy.

The McLaren junior enjoyed a smooth getaway from the line at the start, while his squadmate Nobuharu Matsushita bogged down alongside, dropping out of the top ten.

But, when Nato came under pressure from Raffaele Marciello and both were passed by Arthur Pic, the Frenchman then attempted a misjudged block on the Ferrari junior that ended in a pileup.

Forcing Marciello to the edge of the track on the inside line, Nato braked late and hit Pic ahead, turning him around. All three ended up stranded on the track, with Red Bull’s Pierre Gasly also collected in the crash.

A lengthy safety car period followed and, with the window for the mandatory stop opening, the drivers who started on the softer compound all opted to make the change. Alexander Rossi left the pits as the leader of those on alternate strategies, with Racing Engineering mechanics beating Lynn’s DAMS crew.

Vandoorne’s restart was imperfect, allowing Rio Haryanto to go alongside him on the main straight, but the ART driver held on and was soon in the clear.

As the two started to escape the rest of the field, Rossi and others began to carve their way through the field – but not before Lynn had bumped into the back of the American’s car, leading to a front wing damage scare.

While the Racing Engineering driver had little trouble passing driver after driver, Lynn was not as fast and was soon under pressure from?fellow GP3 champion Mitch Evans. After a few laps, the Kiwi was through, with Lynn audibly panicking on his team radio.

The fighting took its toll on both, with the Brit soon slipping behind Sergey Sirotkin and Jordan King, the latter then going on to pass Evans with DRS.

Ten seconds up the road from a charging Rossi, Vandoorne opted to make his stop and rejoined deep in the field, 17 seconds off the lead. But the pace difference proved massive and the Belgian immediately began to make up the spots.

With five laps to go, he had passed the second-place car of Rossi’s resilient teammate King and set out after the American.

The Belgian finally caught up on the penultimate lap and quickly passed Rossi, storming off into the distance.

Haryanto, on the same strategy as Vandoorne, caught his former Caterham squadmate on the final lap to take second, with Rossi settling for third.

His teammate King was an excellent fourth on his debut, ahead of fellow rookie Robert Visoiu, who took fifth despite a penalty for speeding in the pitlane.

Matsushita finished sixth on the road, but the stewards took issue with him weaving on the track after his stop and demoted him to tenth with a five-second penalty.

As such, Evans inherited sixth, while Nathanael Berthon and Julian Leal will share the front row? in the reverse-grid race tomorrow. Arden’s Andre Negrao took ninth.