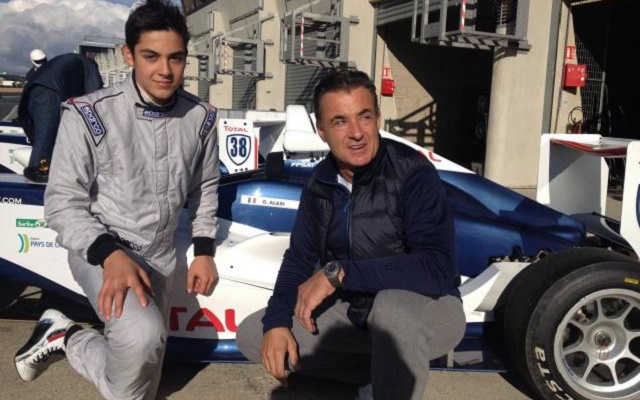 Giuliano Alesi marked his first race in single-seaters with a victory as he prevailed in the French F4 2015 opener at Ledenon.

Having started from pole, Alesi enjoyed a trouble-free debut to finish more than five seconds clear of opposition.

After his getaway, the Frenchman was allowed to build up an advantage over his pursuers, with front row starter Kami Laliberte holding off sophomores Valentin Moineault and Axel Matus.

Moineault was finally past the Canadian rookie at halfway point, but Alesi was already several seconds in the clear.

Furthermore, the championship’s top returnee could not really make up any ground and had to settle for second.

Matus passed Laliberte soon after Moineault and brought the car home to record his maiden podium.

Laliberte found himself involved in a lengthy battle with Nerses Isaakyan, who eventually edged ahead. But both were overtaken by a charging Gabriel Aubry, who claimed fourth place after starting in tenth.

Julien Darras had to do with seventh, while Sacha Fenestraz made it up from 15th on the grid to eighth. Julien Andlauer and Alexey Korneev rounded out the top ten.

Korneev will be on pole for the reverse-grid race later today, while Alesi will head the field into battle in Sunday’s race three.