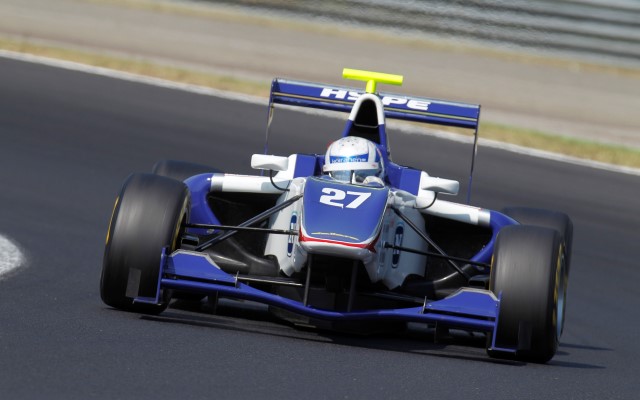 Aaro Vainio saw off a post-safety car attack from Conor Daly to become the first two-time winner in GP3 in 2013 in race one at the Hungaroring.

Vainio led away from pole position and build up a healthy margin of over two seconds over Daly at one stage, until the safety car was called following an accident on the exit of turn one.

When the race restarted with two laps to go, Daly was able to get alongside Vainio into turn two but had to make do with second place.

Daniil Kvyat held third place throughout the race to secure his maiden GP3 podium finish after three previous fourth-places. Jack Harvey finished fourth, just ahead of Carlos Sainz and Facu Regalia, who both made up three places off the line.

Kevin Korjus came home in seventh after slipping back from fourth on the grid on the opening lap. Robert Visoiu used a good start to take eighth, setting himself up for a potential repeat of his win from the reverse grid pole in Valencia.

The battle for ninth was where most of the action in the race came. Bamboo?pair Melville McKee and Lewis Williamson both lost ground off the start, and then McKee struggled for pace. That allowed Williamson through into ninth place, but the Scot spun after the restart.

That promoted Patric Niederhauser into ninth and Giovanni Venturini into tenth, with Alex Fontana 11th and championship Tio Ellinas failing to score for the first time this year back in 12th.

After starting tenth, the Cypriot lost one spot on the first lap, before Niederhauser got by one lap later. As he tried to hang on around the outside of the Swiss driver at turn two, Venturini got ahead into turn three. That caused a loss of momentum that allowed Fontana through, before Ellinas ran wide at turn four, promoting his team-mate Dino Zamparelli. Ellinas managed to get back ahead of Zamparelli a few laps later and attacked Fontana on the last lap, only to be forced off the track exiting turn three. After the chequered flag, he pulled alongside and gesticulated towards Fontana.