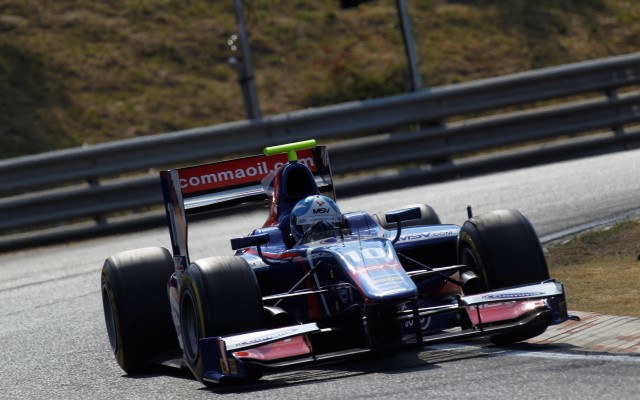 Jolyon Palmer made the most of an alternative strategy to claim his first feature race win in GP2 in an action-packed encounter at the Hungaroring.

It was Palmer’s Carlin team-mate Felipe Nasr who took the lead of the race at the start after a poor getaway from pole-sitter Tom Dillmann. Palmer got up into third behind Fabio Leimer, before being passed by Marcus Ericsson, but the Briton had started on the harder of the two available tyre compounds and would be going longer into the race before making his pitstop.

When Nasr stopped for a slow tyre change, he rejoined just ahead of Ericsson, only for the Swede to break late into turn two and move ahead. Up front though Palmer was going quickly and put a large enough gap between himself and Ericsson to rejoin alongside when he pitted in the middle of the race for another set of mediums.

Ericsson managed to stay ahead of Palmer initially but lacked the pace of the Carlin man on his older tyres. In the first of several attempts, Palmer dived past into turn three only to run wide off the track and hand the place back to Ericsson. He tried again at turn one, only to lock up and run deep. Nearly ten minutes later, he made another move down the inside, but again ran slightly wide to allow Ericsson back alongside. Palmer had the inside line for turn two however, and he was able to make the move stick.

Palmer ran away into the distance to record a 15 second victory, and what was only his first podium result of the year.

Ericsson came under attack from Nasr in the closing stages, but the Brazilian’s attempts to make it a Carlin one-two were hampered when Johnny Cecotto decided to get involved despite being a lap down having had to pit for a new front wing and serve a drive-through penalty after running into Dillmann. Despite advice from his Arden engineer warning him not to get involved with just two laps to go, he made a risky move on Nasr on the inside at turn nine that forced the Carlin driver into avoiding action.

Leimer finished fourth, with Stephane Richelmi on his tail. Sixth was Simon Trummer, who only pitted from the lead with half a dozen laps to go and then took advantage of his fresh rubber to pass an ailing Sam Bird.

That move was made just up the road from an intense battle for the minor points placings. After passing?James Calado, Nathanael Berthon put a move on fellow Frenchman Dillmann for eighth place that led to Dillmann being hit by Cecotto. Cecotto’s team-mate Mitch Evans steered his way through the trouble on fresh tyres to pass Berthon and then Bird to finish seventh. Berthon also passed Bird to take eighth, his first points of the season and the reverse grid pole. Calado made it home in ninth with Bird in tenth.

Championship leader Stefano Coletti got caught up with Jake Rosenzweig on the first lap after qualifying back in 18th and never managed to recover, finishing down in 16th.