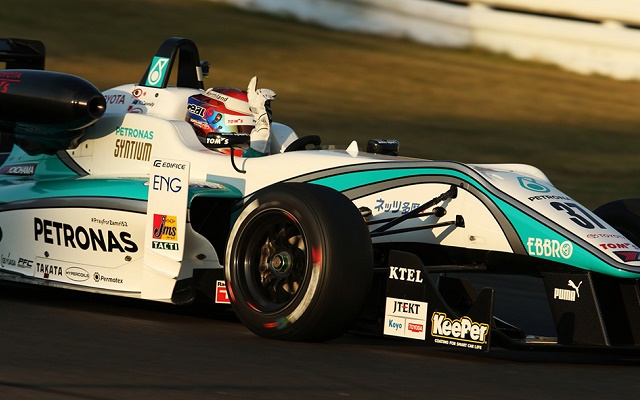 TOM’S racer Nick Cassidy secured the team’s 14th Japanese F3 drivers’ title from the last 20 years with a dominant victory in the final race of the season at Sugo.

Cassidy only needed to finish fifth to put his title beyond doubt, but instead produced what was arguably the season’s best performance.

Starting from pole, he was 2.5s up the road after one lap and eventually finished 20 seconds ahead of the pack.

His rival and teammate Kenta Yamashita ran in third behind B-Max’s Lucas Ordonez for most of the race, before Ordonez and the lapped car of his team owner Dragon appeared to slow on the main straight, allowing their teammate Mitsunori Takaboshi to pass Yamashita.

However, the ploy did not work out, as while Ordonez kept second place, Takaboshi was demoted to eighth with a 30-second penalty.

As such, Yamashita completed the top three, ahead of Keishi Ishikawa, Nirei Fukuzumi, who was forced wide by Ordonez at the start, and Tsubasa Takahashi.