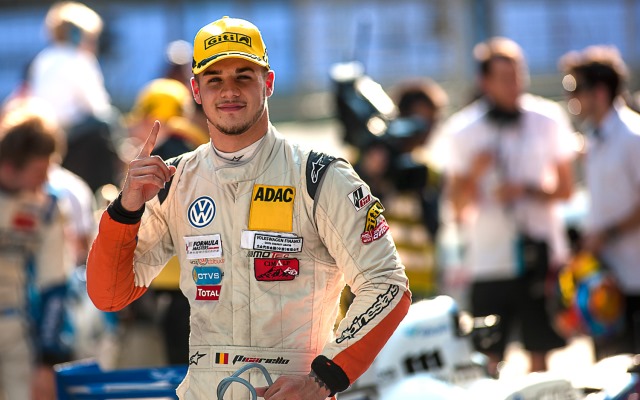 Belgian driver Alessio Picariello won twice from pole on Sunday to complete an inch-perfect weekend at Shanghai as the 2015 Formula Masters China Series season drew to a close.

The Absolute Racing driver thus took his fifth straight win?in the series and clinched fourth place in the championship despite having missed the first half?of the season.

The 2013 ADAC Formel Masters champ was peerless in race one, winning by a comfortable margin of nearly four seconds ahead of teammate Oliver Askew, who took his second podium finish in as many races.

The first race of the day went off to an inauspicious start as the asphalt on the starting grid had noticeably degraded from the previous day. With a standing start not being possible under the circumstances, the race got underway behind the safety car, which stayed out for a lap.

He began closing in on Askew soon after, but lost pace late in the race and was forced to defend from Rump to hold onto third.

Aussie Aidan Read came home fifth for Eurasia, ahead of KCMG’s Chinese duo Sean Zheng and Yuan Bo. The latter?was involved in a battle with teammate Jeffrey Ye, which saw Ye spin and fall to 12th.

Meritus duo Daniel Woodroof and Jake Parsons were also involved in a race-long battle, which saw the Malaysian edge out the Australian at the flag. Arrows racer Matthew Swanepoel completed the top ten.

Picariello had?to work harder?in the second race, having to survive two safety car periods to edge out?Rump for the win. The second of those was due to a spin for Rowe.

Parsons held on to third ahead of Read, a result which confirmed the Meritus driver as series runner-up. Behind them, Askew pipped Woodroof to fifth in a photo-finish.

Yuan Bo ended up seventh ahead of Kim Jeong Tae, while Zheng passed Tomoki Takahashi on the last lap to finish ninth.