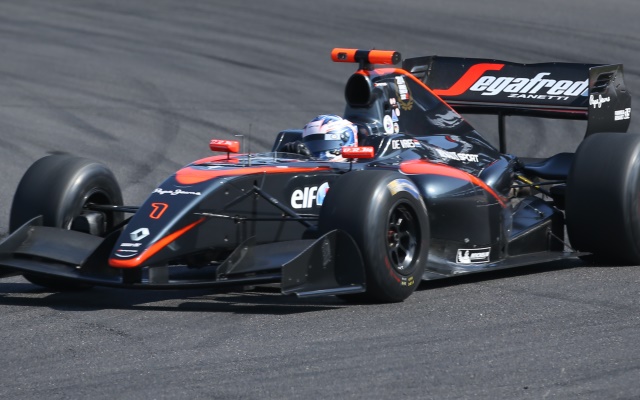 Nyck de Vries secured third place in the Formula Renault 3.5 standings and the top rookie in style as he claimed his maiden win in the final race of the year at Jerez.

The 2014 Eurocup Formula Renault 2.0 champion’s first victory comes in the last race before Renault withdraws its support, and gives former champion DAMS a single win before it too bows out.

De Vries had to beat the two championship contenders Oliver Rowland and Matthieu Vaxiviere and did so having built a nine-second lead prior to a late safety car period.

It was champion Rowland who led from pole while de Vries got a better start than Vaxiviere to take second.

He then inherited the lead when Rowland took a trip through the gravel later in the lap after he hit standing water on the exit of the chicane for the first time.

After an early safety car to recover the standed machine of Nikita Zlobin, with Egor Orudzhev defending second place from Vaxiviere and Rowland now down to fourth, de Vries was able to build a margin up front which became nine seconds when the mandatory pitstops shook out.

A second safety car was needed when Roy Nissany skated off out of ninth and into the Turn 1 gravel trap with a rear-left puncture – likely caused by contact with Andre Negrao, who pitted for a new front wing.

That eliminated de Vries’ comfortable margin but he set consecutive fastest laps straight after the restart to win by 2.5 seconds.

Rowland climbed to second through the pitstop phase, as Vaxiviere continued to be held up by Orudzhev before making contact as he overtook, giving the Russian a front-right puncture.

Rowland then kept Vaxiviere at bay after the restart, but couldn’t do anything about de Vries and thus missed out on getting a double victory.

Tio Ellinas took fourth, and clinched the same position in the championship at the expense of Orudzhev, who recovered to seventh.

Ahead, Gustav Malja kept Tom Dillmann at bay to finish behind his Strakka team-mate in fifth. Dillmann had passed Malja around the outside just prior to the pitstops, only for the Swede to emerge ahead again from the pitlane.

Jazeman Jaafar, Sean Gelael and Nicholas Latifi completed the top 10 – the latter had been fifth early on but lost out with a very slow pitstop.

Dean Stoneman had been just five points behind team-mate de Vries in the battle for third in the standings but was eliminated in startline contact with Alfonso Celis and falls to sixth.