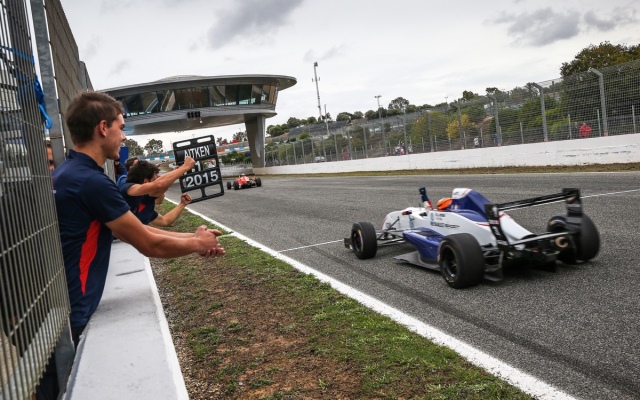 Jack Aitken clinched the Eurocup Formula Renault 2.0 title despite finishing 16th in the final race of the year at Jerez, which was won by Ben Barnicoat.

After an off in a difficult qualifying session had left him 25th on the grid, things got worse for Aitken when his car stopped on his way to the grid, forcing him to start from the pits.

But even with him not scoring points, his rivals Louis Deletraz and Kevin Jorg needed to win and finish on the podium respectively to beat him to the championship.

Deletraz started third but went in the wrong direction during the race, being shuffled down to sixth.

Jorg started from 12th and made a baffling gamble to start on wet tyres on what was pretty much a dry track, and finished down in 24th.

Up front, polesitter Barnicoat stayed ahead of Anthoine Hubert on the opening lap as a safety car was triggered for a first-corner spill that led to James Allen finding the gravel.

The safety car made a second appearance later in the race when Vasily Romanov went off, after which Barnicoat controlled the final laps to finish 0.749s ahead of Hubert for his third win of the campaign.

In the process, Barnicoat pipped Hubert to fourth place in the final standings by two points.

Ignazio D’Agosto was the first of the drivers to demote a struggling Deletraz, and in doing so the FR2.0 veteran completed a hat-trick of podium finishes at the final round.

Jake Hughes and Ukyo Sasahara also got by Deletraz, charging from eighth and ninth on the grid.

In finishing sixth, Deletraz did at least ensure he matched Jorg’s points tally and takes the championship runner-up position thanks to his three wins.

Matevos Isaakyan couldn’t quite get a move done on the Swiss driver and had to settle for seventh in front of the championship’s top rookie Harrison Scott, with Martin Kodric and Dennis Olsen completing the top 10.

Aitken finished 16th, but could celebrate his second championship within a week after also taking the Alps crown at the same circuit last weekend.