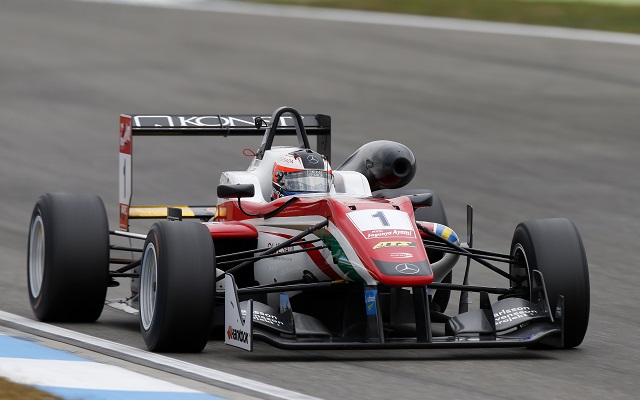 The race was initially delayed due to foggy conditions, but once it begun, Rosenqvist took the lead at the start and never looked back?throughout the four separate safety car periods.

Due to the damp conditions of the track, a lot of drivers had opted to start the race on the wet tyres, including pole sitter Jake Dennis.

Antonio Giovinazzi starting alongside the Brit opted to start the race on slicks, but it was Rosenqvist from third on the grid who made a terrific start on slicks to gain the lead by turn 1.

Alexander Albon, who started down in fifth place had also made a good start and slotted in behind Rosenqvist with Giovinazzi settling for third position. Alexander Sims was then able to muscle past the Carlin driver for third later in the lap.

Many of the drivers who started on wets were starting to struggle as the track dried up. Contact between Pietro Fittipaldi and Nicolas Pohler at the Mercedes corner brought out the first safety car.

Most of the drivers on wets took the opportunity to pit for slick tyres including Dennis, while Charles Leclerc opted to stay out.

The first restart saw Rosenqvist bolt away from Albon and Sims, only for the race to be interrupted again due to multiple incidents further down in the field.

The second restart saw Albon and Sims much closer to Rosenqvist, but neither were able to make a dent in his lead. Still yet to pit, Leclerc?s tyres had all but given up as he dropped further down the field and out of the points with a spin at turn 1.

Sims then made an ambitious move on Albon for second at the Mercedes corner, but went in too deep allowing Giovinazzi back ahead for third position.

Another safety car was deployed for Nabil Jeffri?s stricken Motopark car in the gravel trap at turn 11.

Rosenqvist once again made a good restart, but again contact?further down in the pack saw debris strewn across the track, bringing out the fourth and final safety car.

The race was ended behind the safety car, giving Rosenqvist his 13th win of the season. Albon took second with Giovinazzi third.

They were followed by Sims, Callum Ilott, Maximilian Gunther and Dennis who confirmed his third place in the championship.

Mikkel Jensen took eighth with Michele Beretta taking his first points in the series from 24th on the grid in ninth, while Raoul Hyman rounded out the top 10.