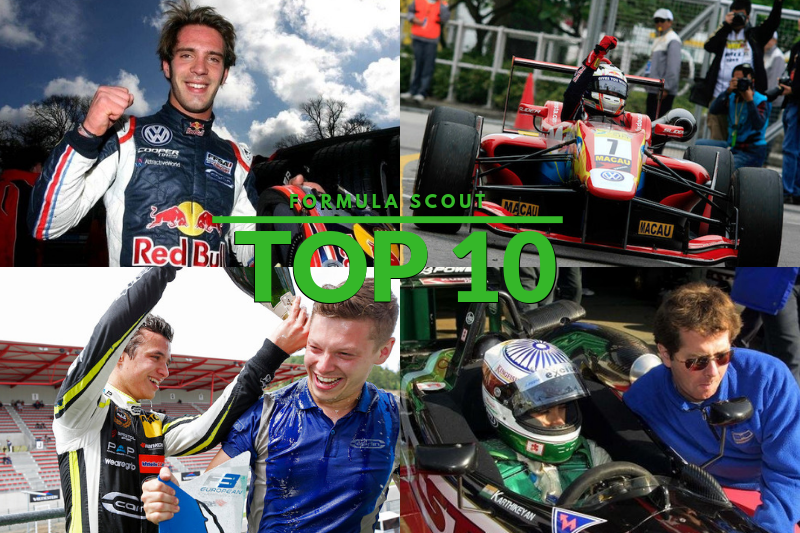 Founded in 1996, Carlin Motorsport has been one of the biggest names in junior single-seaters since the turn of the century. With 1000 podiums under its belt, we look at the team’s top 10 drivers.

If you needed a measurement of Carlin’s success, it has been on the podium more times in just over two decades than Scuderia Ferrari has in 68 years. Admittedly the entirety of Carlin’s success has been outside of Formula 1, but there is no other team that has been competitive in as many series as Trevor Carlin’s eponymous team has.

It’s won titles in Britain, Europe and North America, won the Macau Grand Prix twice and has been one of the top teams in the F1 support paddock for the last few years.

This weekend it will be racing in Austria, England and Italy, and could add at least 22 podiums to its ever expanding tally. 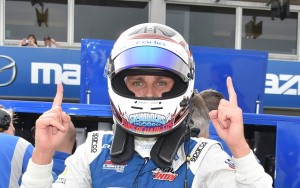 Max Chilton’s long-term partnership with Carlin began with a race victory and fourth in the standings in his third year in British F3 in 2009.

Chilton moved to Ocean Racing Technology to make his GP2 debut in 2010, before re-joining Carlin he following year as it entered F1’s primary feeder series. Although he earned just four points in Carlin’s debut season, 2012 brought a change of fortunes as Chilton took a brace of feature race wins at the Hungaroring and in Singapore, as well as securing fourth in the drivers’ championship.

He was critical in turning Carlin into a GP2 frontrunner, allowing it to take Felipe Nasr within touching distance of the title just two years later.

Once Chilton’s F1 dream ended in 2014, he became the obvious choice to join Carlin’s first venture into America. Missing three races meant he wasn’t in title contention, but he still took the team’s first oval victory at Iowa. Chilton’s efforts earned him IndyCar promotion with Chip Ganassi Racing in 2016, the highlight of which was his long run leading the 2017 Indianapolis 500, but he reunited with Carlin when it joined IndyCar this year. There were no top 10 finishes, understandable in a learning year for the team. 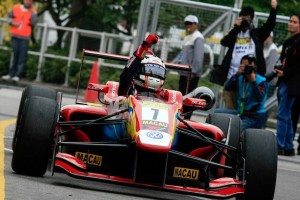 Antonio Felix da Costa is Carlin’s most successful driver at the Macau Grand Prix, beating Felix Rosenqvist to win in 2012 and 2016.

Their association started with a duo of GP3 race weekends in 2010 before a full season in 2012 led to third in the standings. The clear highlight was da Costa’s double win at the Hungaroring, a feat that has been unmatched in the series’ history.

He followed it with two second place finishes at Spa-Francorchamps the following round, and had it not been for technical issues in the feature race of the season finale at Monza, da Costa would have probably beaten Mitch Evans to the title. 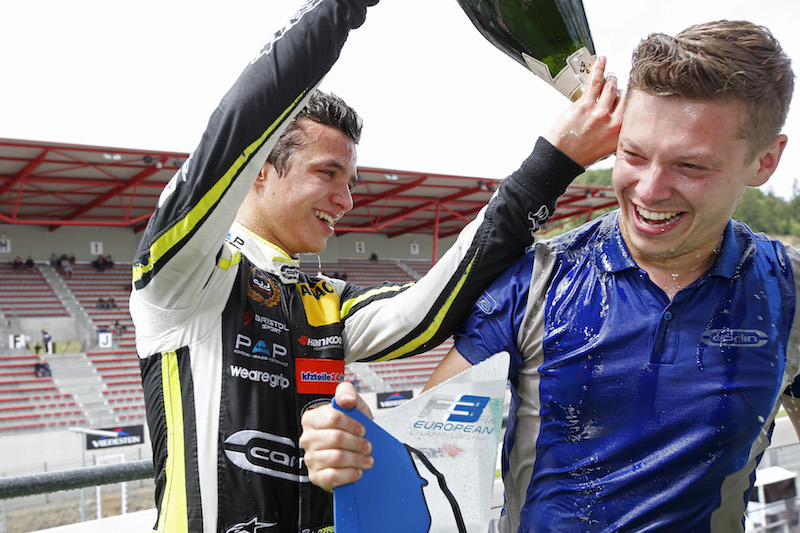 The driver who broke Prema’s six-year stranglehold on European Formula 3 with a stellar championship winning season – picking up 20 podiums from 30 races including nine victories.

The groundwork was laid in his first year with Carlin in 2015, where he bounced back from missing out on the Ginetta Junior Championship in his first year in cars, to win MSA Formula (now British F4) in style.

After taking his fourth successive title as a rookie in three years with his European F3 conquering, Norris set his sights on Formula 2 – gambling by continuing with returnee Carlin.

It proved to be the right decision from the very first race, which he won by over eight seconds despite a slow pitstop and a suspected engine issue. Although it’s his only win to date, adding seven further podium finishes has placed him second, just 22 points behind George Russell.

When Fernando Alonso announced his retirement from Formula 1, and Stoffel Vandoorne failed to live up to expectations, Norris was the obvious choice to join McLaren for 2019. Norris is still only an 18-year-old, and his F1 drive is a testament to the impression made by his success with Carlin over the last four years. 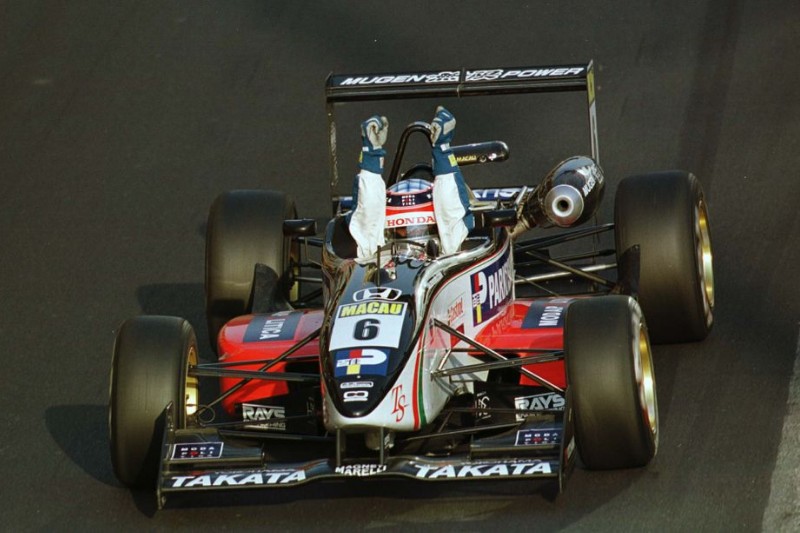 Sato’s rookie season in 2000 made him the favourite for the following year. Despite a difficult start, Sato soon turned things around, winning five of the last nine races.

He showed his real strength in racing conditions, taking 12 wins from just six pole positions. Sato capped his brilliant year with victories at both the Macau GP and the Masters of F3 at Zandvoort, taking Carlin’s first win in both.

This fiery, fast attitude was enough to convince Jordan to hand Sato his F1 debut in 2002. He spent just over five seasons in F1, taking one podium, before switching to America to become a Indy 500 and Long Beach GP winner. 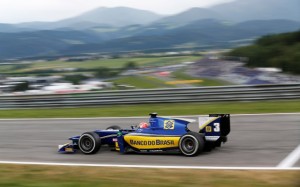 Felipe Nasr’s relationship with Carlin yielded the British F3 title in its first year, a dominant campaign helping him comfortably beat team-mates Kevin Magnussen and Carlos Huertas. He stayed with the team for Macau, and missed out on victory by just 0.359 seconds.

He switched to DAMS to make his GP2 debut in 2012, but found much greater success when he re-joined Carlin in the series a year later. Teamed up with eventual 2014 champion Jolyon Palmer, he battled for the title until a rough second half of the season and a lack of victories grounded him to fourth.

Nasr remained for 2014, participating in a thrilling season-long duel with DAMS driver Palmer, although unlike the previous year Nasr was bested by Palmer, and a late-season charge allowed Stoffel Vandoorne to nick second.

However, Nasr’s efforts were still enough for him to secure promotion to F1, and even though he lost his seat at the end of 2016, he’s made a career in sportscar racing in America. 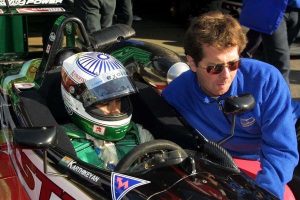 Perhaps not the first name you’d associate with success or Carlin, but an important figure in the team’s history nevertheless.

The Indian raced with Carlin back in 1998, in only the team’s second year in British F3, impressing with two podiums, the team’s first, in a part-time campaign.

1999 saw?Karthikeyan undertake his first full year and he earned Carlin its first win in the series in the second race at Brands Hatch, a day after also taking its first pole and fastest lap. He followed it up with another win at the circuit two months later.

He left to join Stewart at the end of the year, but re-joined Carlin three years later when the team entered Formula V8 3.5. Once again, Karthikeyan was Carlin’s leading driver and he earned fourth in the drivers’ championship with four podiums.

Possibly the most remarkable part of Karthikeyan’s time at Carlin was when the partnership raced on street circuits. He made his Macau debut in 1998, finishing 11th. He showed his true pace in 2000, setting pole and taking fastest lap in the Qualifying and Main race, but ultimately finishing in 13th. In 2002 he also set fastest lap for the Qualifying race, and finished third, but crashed on lap three of the main race.

In 2000 he won the Korea Super Prix, around the challenging Changwon Street Circuit. from pole. He and team-mate Sato were also winners in cameo appearances in French F3. 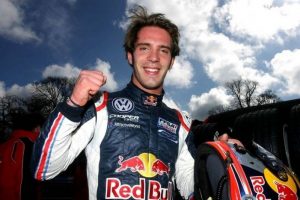 Jean-Eric Vergne put together one of the most dominant British Formula 3 title campaigns ever, taking at least one victory at eight of the 10 rounds, including a clean sweep of three wins at Spa.

He beat James Calado by 99 points to take the title, before continuing with Carlin into Formula V8 3.5. A collision with fellow Carlin driver Robert Wickens in the season finale denied him the championship, but it was Vergne who received a Formula 1 call-up for the following year.

Although his 2012 Toro Rosso team-mate and 2010 FV8 3.5 runner-up Daniel Ricciardo missed two rounds of the 2011 season, Vergne regularly had the upper hand over the Australian regardless, and the pair’s rivalry came to the boil at Monza in a thrilling duel. Although a 10-second penalty would deny him victory, Vergne triumphed on the track in their wheel-to-wheel dice despite having a partially broken front wing.

Vergne also competed at Macau and in the Masters of F3 with Carlin, finishing seventh and fourth as a F3 debutant. 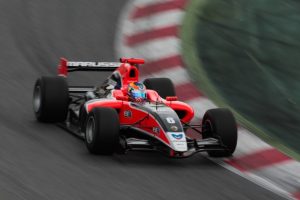 A Silverstone win was the among the highs, but inconsistencies left him 12th in the drivers’ championship. Wickens finished runner-up in Formula Two and GP3 over the next couple of years, with his only appearances with Carlin coming in the shape of a one-off British Formula 3 weekend – he took a podium in race two.

2011 finally brought Wickens a championship title to show for his efforts, and Carlin its first FV8 3.6 championship success, as it?scored more than double the points of Fortec, who finished second in the teams’ championship. Carlin’s Wickens and Jean-Eric Vergne utterly dominated, winning 10 of the 17 races between them.

The duo headed into the season finale separated by just two points. Wickens converted pole position into the win in the opening race, and then the title protagonists controversially collided in the final race, leading to them both retiring and handing Wickens the title.

Wickens has since starred in the DTM and IndyCar, and is currently in rehabilitation after a scary crash in the Pocono 500 earlier this year. 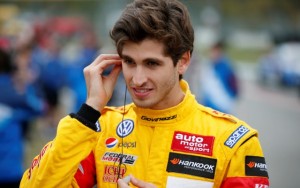 Antonio Giovinazzi nearly winning 2016’s GP2 title in his rookie season was a shock to everyone apart from those at Carlin.

After an average debut European Formula 3 season with Double R Racing in 2013, Giovinazzi instantly found success when he joined Carlin for a second campaign in the series.

At the time, Carlin had a six-car fleet, with Giovinazzi running under the banner of his long-timer supporter Jagonya Ayam. Tom Blomqvist shined brightest at the team in 2014 but Giovinazzi stepped up the following year, pushing title rivals Charles Leclerc and Felix Rosenqvist all year before eventually coming second to Rosenqvist.

It was a title push which started with nine consecutive podiums including wins at Hockenheim and the Pau Grand Prix. He added victory at the Masters of F3, and finished fourth at Macau. He actually finished first on the road in the Qualifying race, but was penalised 20 seconds for contact with Daniel Juncadella, relegating him to a 10th place start for the grand prix itself. 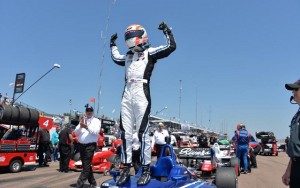 Ed Jones was an instrumental player in helping Carlin crack America. His 2016 title triumph over Santiago Urrutia was arguably the closest fought battle the Mazda Road to Indy has ever seen.

A title decider with drama?and controversy that rivalled IndyCar’s thrilling 2016 climax as Carlin team-mate Felix Serralles allowed Jones past on the final lap to take the title at only Carlin’s second time of trying.

Jones’ first involvement with Carlin was in 2014, where he raced part-time in one of the most competitive European F3 seasons ever, frequently scoring points but only occasionally troubling the podium prompting his bold switch to America the following year.

He became Carlin’s lead driver in its first adventure across the pond, finding speed on the oval courses as well as the more familiar road and street tracks. His stellar rookie year, in which he won the first three races, led the foundations for his 2016 success and surely will always leave the possibility of the Indy 500 podium finisher to one day reunite with Carlin in IndyCar.