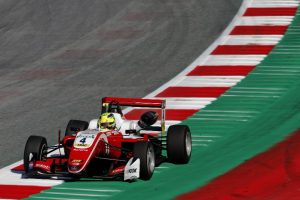 Mick Schumacher took his fifth pole of the season in qualifying for the first European Formula 3 race at the Nurburgring, leading a Prema top three lockout.

Prema and Motopark were the top two teams from free practice, and that pace continued with Jonathan Aberdein and Sebastian Fernandez leading the way for Motopark early on. Carlin’s Jehan Daruvala also got involved at the top, but it wasn’t long before Schumacher was setting the benchmark.

His best went unbeaten in the closing minutes of the session, with team-mate Robert Shwartzman coming closest 0.247 seconds behind. The third Prema car of Marcus Armstrong was only marginally further back, with Daruvala taking Carlin’s best qualifying performance since Silverstone in fourth.

Juri Vips ended up being the lead Motopark driver in fifth, with 0.023s covering himself and team-mates Dan Ticktum and Aberdein.

Enaam Ahmed was eighth for Hitech GP, over half a second off the pace, with Fabio Scherer (Motopark) and Ralf Aron (Prema) completing the top 10.

Fernandez ended up down in 16th, just over two tenths slower than eighth placed Ahmed, while Julian Hanses was only 1.230s off pole in 22nd on his championship return with Carlin.