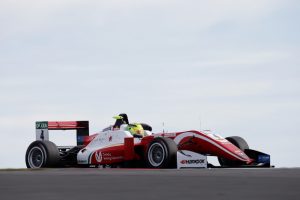 Mick Schumacher led both of the European Formula 3 free practice sessions at the Red Bull Ring, as Prema and Motopark set the pace.

Schumacher’s Prema team-mate Ralf Aron set the early pace in both sessions, but was shuffled down the order both times by the late qualifying runs.

Prema drivers filled in the odd numbered positions down to seventh with Marcus Armstrong, Aron and FP1 runner-up Robert Shwartzman, with Motopark filling the even spots in the top six with Juri Vips, Fabio Scherer and championship leader Dan Ticktum.

Ferdinand Habsburg and Sacha Fenestraz were eighth and ninth fastest for Carlin, with Hitech GP’s Enaam Ahmed completing the top 10. The fifth of the Prema drivers, Guan Yu Zhou, was 11th.

Championship returnee Julian Hanses was 22nd out of the 23 drivers with Carlin, just over a second off Schumacher.