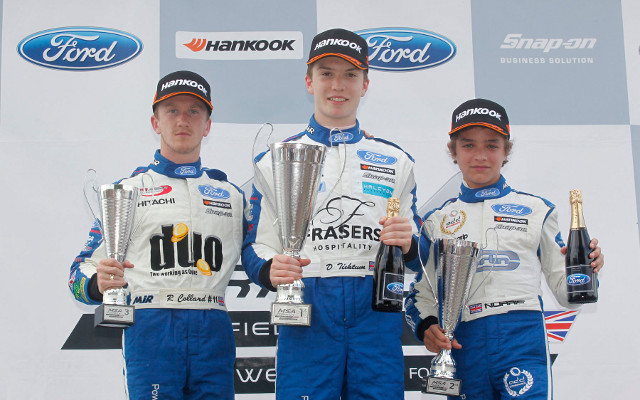 Dan Ticktum bounced back from his exclusion from the last MSA Formula meeting to win the first race at Snetterton after early leader Colton Herta spun.

Herta had dominated the weekend so far, topping all three of Friday’s test sessions before taking a double pole. He then made a good start to the race to move into an early lead, but spun at Brundle on the second lap and fell down the order.

Ticktum had capitalised on a sluggish getaway for Herta’s front-row starting Carlin team-mate Lando Norris to move into second and then inherit the lead when Herta spun.

In a repeat of the last race before the summer break at Croft (from which the Fortec driver was last week excluded due to his race one clash with Norris) Ticktum, Norris and points leader Ricky Collard ran in close formation for most of the remaining distance.

Ticktum was able to extend his advantage in the closing stages, crossing the finish line 1.281 seconds clear of Norris, who had Collard 0.754s behind.

The battle for seventh was an all-Double R affair, after Matheus Leist slipped behind Florescu, Ahmed and his team-mate Tarun Reddy on the opening lap.

Leist and Reddy swapped positions twice more before the Brazilian grabbed the upper hand on the final lap.

Reddy only just held onto eighth, a mere tenth ahead of a recovering Herta. By finishing ninth, the American secured a place on the front row of the reverse grid for race two, alongside Jack Barlow.