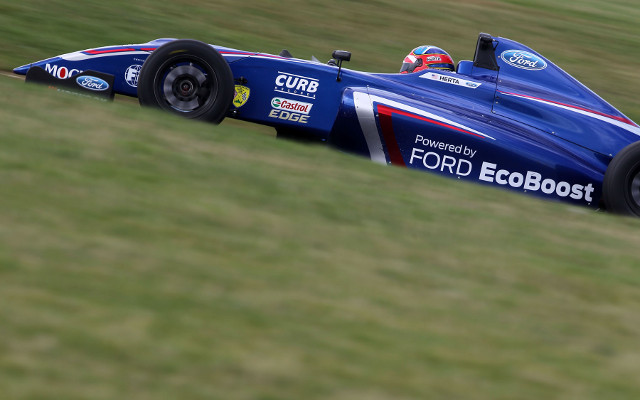 MSA Formula driver Colton Herta made good on his speed at Snetterton to score his first pole positions in the series.

After topping all three test sessions on Friday at the Norfolk circuit, American racer Herta took charge in the third quarter of the 20-minute session.

He moved half a second clear of his title-fighting Carlin team-mate Lando Norris, and then improved to a final best time of 1m50.398s on his next lap to secure a double pole.

Norris finished up 0.363 seconds behind in second place.

Dan Ticktum, who last week was excluded from all three races at Croft for his crash with Norris, set a couple of improved laps late on but the Fortec driver was still nearly seven tenths adrift of pole in third.

He will line up just behind the Carlin pair for both races one and three.

Championship leader Ricky Collard was fourth fastest but only managed one representative lap time before pitting.

He will therefore start the third race from the back of the grid, with his second-best time nearly six seconds off the pace.

Sennan Fielding and Matheus Leist, fresh from appearances in USF2000 and European F3 respectively last weekend, took fifth and sixth and both move up a place for race three.

For race three, Florescu takes sixth, Mitchell and Josh Smith climb to seventh and eighth respectively and Reddy and Ahmed complete the top 10.

Jack Barlow and Toby Sowery have both returned after missing Croft, and were 13th and 16th fastest respectively.