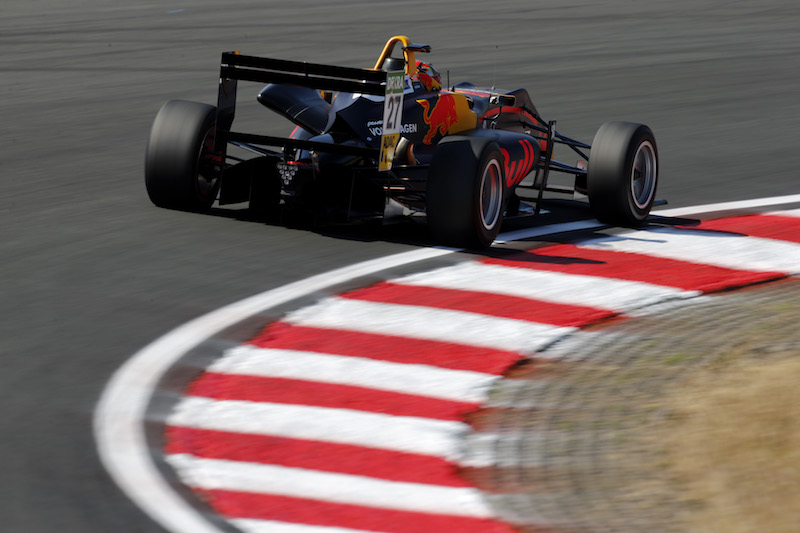 Dan Ticktum claimed a pair of pole positions in second qualifying for the Formula 3 European Championship round at Zandvoort, overturning the dominant Prema team that occupied the top four in the opening session.

Motopark-run Red Bull Junior Ticktum had been a best-of-the-rest fifth in the first session, as Guan Yu Zhou took pole ahead of his Prema team-mates Ralf Aron, Mick Schumacher and Marcus Armstrong.

In the second session, Ticktum managed to put in two laps quicker than anybody else to claim a double pole, beating Aron to the best time by 0.171s.

His second-quickest time was 0.391s faster than nearest challenger Juri Vips, as Aron, Schumacher and points leader Armstrong languished down in 17th, 18th and 23rd having been unable to post a second competitive time in a scrappy session.

On the race one grid, Ticktum is joined on the third row of the grid by his Motopark team-mate Jonathan Aberdein, with the remaining Prema driver Robert Shwartzman seventh, having slipped from first place over the second runs.

Vips is ninth behind Alex Palou, who improved to manage fourth in qualifying two, splitting the Prema quartet of Aron/Schumacher and Armstrong/Zhou.

This time, Vips was eighth behind Ferdinand Habsburg, but he leaps onto the front row based on second-best times.

An even better improvement was put in by Nikita Troitskiy, who was only 12th fastest but came out third best for race three, taking Carlin’s best grid position from an otherwise tough day, with its Pau winner Sacha Fenestraz taking two 18ths and a 22nd.

Zhou was the only Prema driver to make the top 10 on the race three grid in fourth, ahead of Fabio Scherer, Jehan Daruvala, Marino Sato and Palou.

Title contender Enaam Ahmed had a day to forget after crashing out early from the second practice session.

He ended up 22nd out of 24 in the first qualifying session, while in the second session he took 16th and 13th.

On her F3 debut with Van Amersfoort Racing and first competitive outing in nearly 10 months, Sophia Florsch was 23rd in the first qualifying session but improved to 19th in the second session to be the best of the local squad’s three drivers.

Things get even better for race three, when she is set to join Ahmed on the seventh row, just ahead of her team-mates.