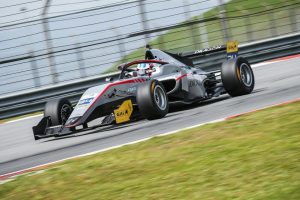 The Hitech GP driver was fastest in both of the 15 minute qualifying sessions, despite missing free practice due to a stomach bug.

Hughes set a 2m03.800s lap in the first session, and bettered that with a 2m03.265s in the second. The two sessions set the grid for the first and third races.

Reigning Asian Formula Renault and Chinese Formula 4 champion Charles Leong made it a Hitech front row lockout for the first race, and was third fastest behind Absolute Racing’s Akash Nandy in the second session. Nandy will line up fourth for the first race.

South African Raoul Hyman, the third of the Hitech drivers, was third and fourth fastest in the two sessions.

“I’m really happy to get double pole, considering I didn?t do practice because I
couldn?t get out of bed this morning [with a stomach bug],” said double poleman Hughes.

“I was in the medical centre when the track went green! I rushed into the car, did three laps and we got pole.

“I really enjoyed it but I?m not used to this humidity ? I?m from Birmingham!”

Other drivers who impressed included BlackArts Racing?s Louis Prette, who qualified fifth and seventh, and Tomoki Takahashi, who went seventh and sixth fastest for Super License.

The slowest driver in both sessions was Japanese F3 regular ‘Dragon’, who was more than four seconds off the pace in his B-MAX Racing Team car.