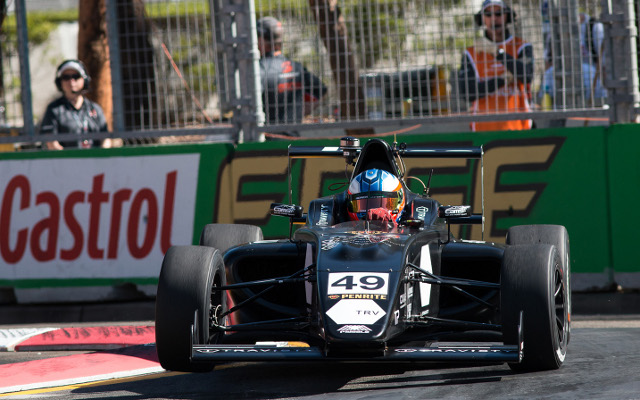 After winning race one, Randle had to come through from sixth on the reverse grid in race two.

Champion Jordan Lloyd started from pole, and after dropping behind Jimmy Vernon off the line, claimed the lead into the Turn 2 chicane.

After initially opening up a lead, he then dropped behind team-mate Harry Hayek into Turn 1 on lap four.

Randle had worked his way up into third by the end of the lap, and then stole second from Lloyd at the same Turn 11 a lap later.

Hayek had a 1.7-second advantage but that was quickly eliminated by Randle. It took until the penultimate lap for the DREAM Motorsport driver to make his move but he did it in style, sweeping around the outside under braking for Turn 2.

Second for Hayek was still his best result of the season, and tied him with sixth-placed Will Brown for third in the championship and the rookie title.

Nick Rowe finished third but was relegated to fifth behind Vernon for a jump start, giving Lloyd the final podium place after a bid from Luis Leeds around the outside of Turn 9 ended with him in the wall.

Randle started the finale from pole but was beaten into Turn 1 by Lloyd, only to reclaim the lead at Turn 2 on lap three after a brief safety car intervention.

A second safety car was called immediately after Leeds was tipped into the barrier at Turn 1 by Hayek for his third crash from three races, which has relegated him from third to sixth in the final standings.

From the restart, Randle drove away to win by nearly two seconds from Lloyd and repeat his hat-trick from Surfers Paradise.

Brown took third and with it the same position in the standings as well as the rookie title, with Hayek classified down in seventh after a penalty.