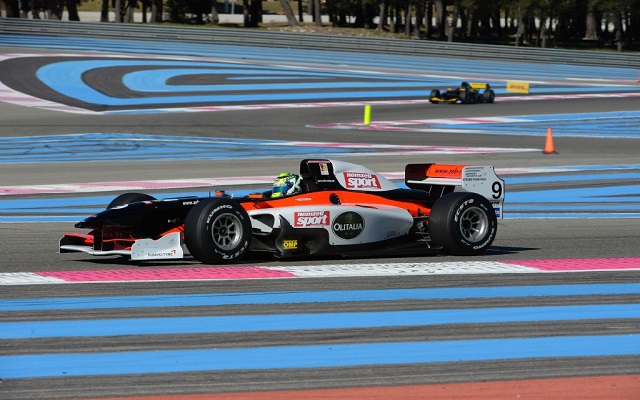 Zele Racing’s Tamas Pal Kiss took his first victory in the Auto GP series in the first race of the second round at Paul Ricard.

The Hungarian nailed pit strategy to win the fight for first place and subsequently cruised to victory, comfortably pulling away from his rivals.

Eurotech’s Kevin Giovesi lined up on pole for the race and had the front row all to himself, as second-placed Kimiya Sato struggled to get away from the grid on the formation lap and had to take the start in last place.

Giovesi kept the lead off the line, leading Markus Pommer and Kiss, while Sato made a lightning stop to recover to fourth place on the opening lap.

The four drivers ran in relative proximity during the first stages of the race, as Giovesi struggled to establish a significant gap to his rivals. As such, it was Sato who first attempted to break out of line, taking an early stop and putting in fastest sectors upon returning to the track.

Pommer followed suit shortly thereafter, which allowed Kiss to up the pace and close in on Giovesi. The Hungarian was the third frontrunner to go into the pits and, thanks to a quick stop by the Zele team, emerged ahead of the battling duo of Pommer and Sato.

Giovesi’s late stop strategy did not end up working out, as he exited the pits behind the leading trio and, with seeming car issues, he had to settle for a finish outside of the podium.

At the front, Kiss increased his advantage over Pommer by six seconds at the checkered flag, taking a dominant win. The German held off Sato, who rounded out the podium.

Virtuosi’s Sam Dejonghe was forced into retirement early on due to car issues, while Niccolo Schiro simply couldn’t get going in his debut Auto GP race and wound up stranded on the grid.