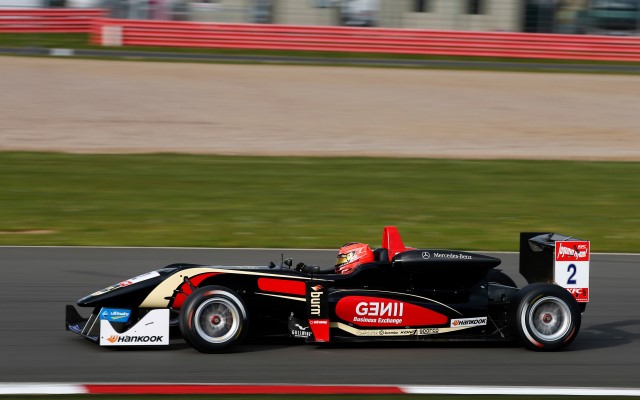 Esteban Ocon led from start to finish as he secured victory in race two on his debut weekend in the FIA F3 European Championship at Silverstone.

After starting from pole position, the Lotus F1 Junior quickly opened up a gap of three seconds over his Prema team-mate Nicholas Latifi and managed the gap until the finish.

Ocon’s fellow Formula Renault 2.0 graduate Antonio Fuoco got the jump on race one winner Tom Blomqvist at the start to move into a third, and the Ferrari protege completed a podium lockout for Prema behind first-time rostrum visitor Latifi.

Blomqvist came under pressure from fellow Carlin driver Jordan King at one stage but was able to escape when King fell into the clutches of Max Verstappen.

The 16-year-old Dutchman lost positions to Ed Jones and Dennis van de Laar at the start but quickly recovered those places before going on to put a move on King for fifth with two laps left.