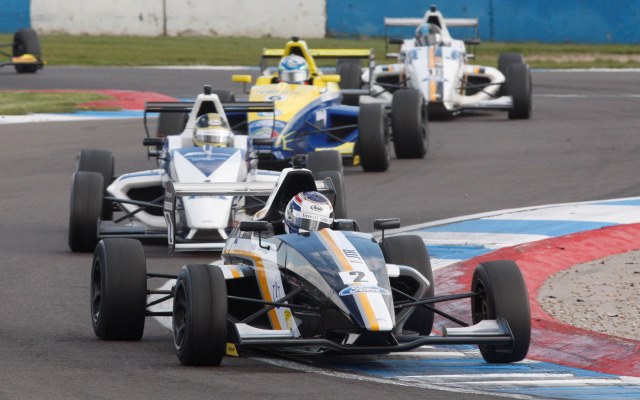 Jayde Kruger scored his third win from four races this year in Formula GB after holding off Sam Brabham to win the opening race of the Donington Park weekend.

The South African made a good start from pole position to retain the lead ahead of Brabham and Harrison Scott.

Brabham briefly took the lead when a mid-race safety car was called, but handed the place back to Kruger in time for the restart.

?I thought Jayde was slowing down because he had a problem, but I soon realised what had happened and I handed back the lead to him,” said Brabham.

Kruger held on to win by 0.421 seconds over JTR team-mate Brabham, with Scott completing the podium a further two seconds back.

Max Marshall had initially held fourth in the third JTR car but fell back to eighth at the restart. Chris Mealin inherited the place only to make an error of his own and slip to P8 himself. That allowed James Abbott to claim fourth ahead of Juan Rosso, with Marshall recovering to sixth. Marshall will start race two on Sunday from reverse grid pole.

The safety car was triggered by Ricky Collard, who was charging up the order from the back after a broken throttle cable prevented him from setting a qualifying lap, when he crashed exiting the final chicane.