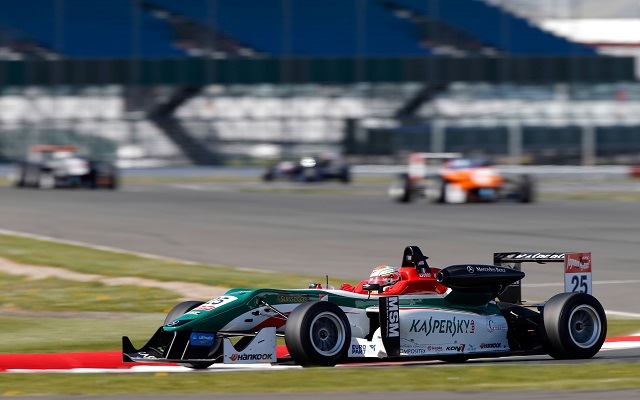 Ferrari junior Antonio Fuoco took his first win in Formula 3 in the third race of the European F3 round at Silverstone.

The 17-year-old Italian got a lightning start from second on the grid to see off poleman Esteban Ocon into turn one and went on to lead the rest of the race.

He took a while to establish an advantage but would prove untouchable once he was in the clear and controlled the race, finishing four seconds ahead of his nearest rival.

Ocon would hold on to second over the opening laps, but soon came under pressure from karting graduate Max Verstappen, with the Dutchman forcing the Lotus junior into a mild mistake midway through the race to take over in P2.

Verstappen went on to cruise to the checkered flag in second, but his first podium in the series appears to be in doubt, as he is currently being investigated for possibly overtaking Tom Blomqvist under yellows in the beginning of the race.

While Ocon dropped off from the Dutchman and seemed to lose pace, he comfortably brought the car home to take third, ensuring his third podium in as many races and retaining the championship lead.

After having been overtaken by Verstappen, Blomqvist sat in fourth in the first half of the race, before surrendering his position to Prema’s Nicholas Latifi after a lengthy battle.

That would not be the end of his woes, as his Jagonya Ayam teammate Antonio Giovinazzi soon closed in on the Brit, having recovered from P12 after a terrible start to the race, and went on to overtake him with a classy move into Copse.

With Giovinazzi taking fifth, Blomqvist had to settle for sixth, narrowly keeping Mucke’s Felix Rosenqvist at bay at the line. Behind them, there was a huge battle for the final points-paying positions, spurred on by troubles for Carlin’s Jordan King, who was losing pace due to front wing damage.

Eventually, it was Lucas Auer who manage to secure eighth after an up-and-down race, while King crawled to the finish in ninth – his result, however, is also under some question, as he seemed to have been given a black-and-orange flag on the penultimate lap.

There were a number of high-profile retirements throughout the course of the race – Carlin rookie Jake Dennis was knocked out of contention over the course of the opening lap, while his teammate Ed Jones spun out of P6 during the closing stages.

Update: According to Autosport, Verstappen will not be penalized as he was adjudged to have been ahead of Blomqvist before the yellow flag zone. As such, the Dutchman will keep his first podium in the series.