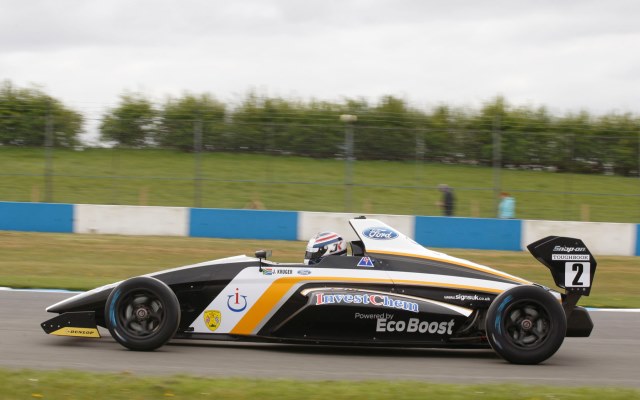 Jayde Kruger will start race one of the second Formula Ford GB round of the season at Donington Park after narrowly beating rivals Sam Brabham and Harrison Scott by less than a tenth of second to top qualifying.

The order of the top three will be reversed for race three according to the trio’s second-best qualifying times, with Scott claiming pole ahead of Brabham and Kruger.

26-year-old South African Kruger leads the standings after two wins at the opening round at Brands Hatch last month.

“Not too shabby,” said Kruger after qualifying. “I’m a little bit disappointed with the result for race three but it’s not like Brands here – we can pass and that’s the plan.”

Max Marshall – team-mate to Kruger and Brabham at JTR – took fourth place ahead of the Radical duo Juan Rosso and James Abbott.

Connor Mills claimed his best grid spot of seventh, as well as top honours in the Scholarship class. Chris Mealin was eighth ahead of Bobby Thompson – a new addition the grid for this weekend in place of Ashley Sutton alongside Mills at Meridian Motorsport.

SWB’s James Webb completed the top ten ahead of Nigerian newcomer Ovie Iroro (driving the sole Richardson Racing car) and his own team-mate Greg Holloway. Ricky Collard was unable to set a time after his car stopped out on track, triggering a red flag.

While the top three switch positions for race three, the drivers placed fourth to 13th remain the same.