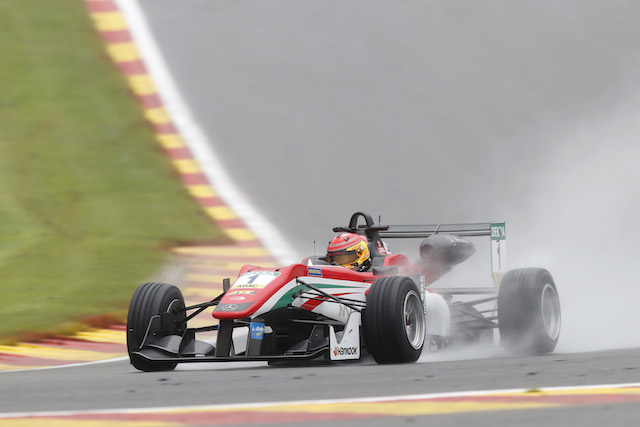 Lance Stroll has taken another win in the FIA Formula 3 European Championship as wet weather shortened the first race at Spa-Francorchamps.

With the ever wild Spa weather drenching?the track in water, the race had to be started under the safety car. After a five-lap procession behind the safety car, the race director decided that the track conditions were good enough for racing. This left the race significantly shortened with only 15 of the original 33 minutes on the clock at the restart.

At the restart, Stroll gunned?it out of the Bus Stop Chicane?to lead his team mate Maximillian Gunther?down into La Source. Ben Barnicoat was initially passed by Nick Cassidy into La Source but Barnicoat was able to keep on his gearbox to retake the position going into Raidillon. With the clear track ahead of him, Stroll’s lead increased lap after lap to well over three seconds.

Further behind the top four, a fight was going on for fifth position as?George Russell?made a move around the outside of Harrison Newey at Le Combes as Newey struggled for traction.

With the standing water not receding, the spray coming from the cars was causing a lot of incidents as drivers attempted to jostle for position. This included Mucke team mates Mikkel Jensen and David Beckmann who came together at La Source while fighting over seventh position.

With only a few minutes left to run, the safety car was brought out again as Weiron Tan crashed at the end of the Kemmel Straight. This effectively ended the race under the safety car and allowed Stroll to easily clench his seventh win of the season.

Barnicoat would hang onto the final podium position while also taking top rookie honours as Cassidy settled for fourth. Fifth place would go the way of Russell, followed by Newey and Beckmann rounding out the top three rookies in sixth and seventh respectively. Ralf Aron would finish eighth in the fourth Prema Powerteam car, with Carlin duo Ryan Tveter and Alessio Lorandi rounding out the top ten.