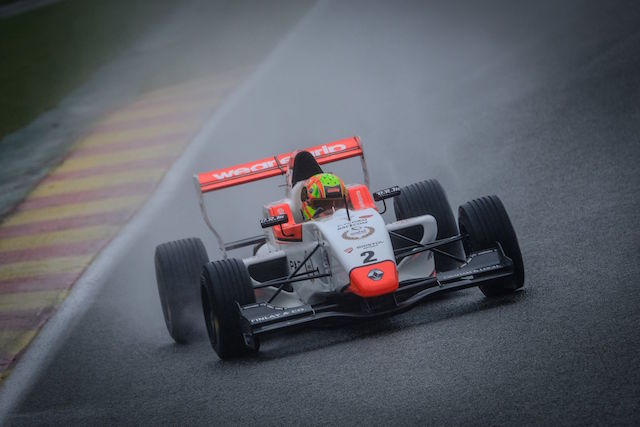 The track was starting to dry out from earlier events at the beginning but as the race continued, the track only got wetter making it harder for drivers to pass.

Norris cruised away from pole as many drivers found it difficult to find traction on the wet track.

Sacha Fenestraz attempted to pass his Tech 1 Team mate?Dorian Boccolacci for second position into La Source, but once he got alongside Boccolacci, Fenestraz spun forcing?the rest of the pack to dodge the stricken driver.

The action was cut short with not even a lap on the board as local driver?Ghislain Cordeel crashed at the end of the Kemmel Straight bringing out the safety car. A lap or two later and with a lot more rain on the track, the safety car was brought in and Norris once again lead the pack out of the final chicane.

After having a chassis-braking?off in the practice session the day before, Gabriel Aubry was able to work his way back up the grid from 19th on the grid to pass Bartlomiej Mirecki for tenth place around the outside of La Source. His team mate?Fenestraz would then follow him passed Mirecki down the Kemmel Straight.

As the track got wetter, it became harder and harder for drivers to pass each other as everywhere but the driver line was soaked?in water. However,?Fenestraz was able to pass Aubry at the end of the Kemmel Straight as Aubry misjudged his braking into the corner and ran wide, allowing?Fenestraz to cruise through on the inside of the corner.

With no other major changes on track, Norris was able to keep the gap behind him to take his fourth win in five races. Boccolacci came home in second position but only just ahead of the Australian James Allen, who took?his first podium in the series in his third year of trying.

Fourth place went to Alex Gill, followed by Henrique Chaves and the rookie Robert Shwartzman. Jehan Daruvala?finished on his own in seventh after having a lonely latter half of the race once he managed to get?passed?eventual eighth place finisher?Julien Falchero.

Euroformula Open regular Antoni Ptak just hung on to ninth position as Fenestraz tried to take the polish driver into the last corner. The Frenchman would have to settle for tenth but still rounded out the top three in the rookie standings.