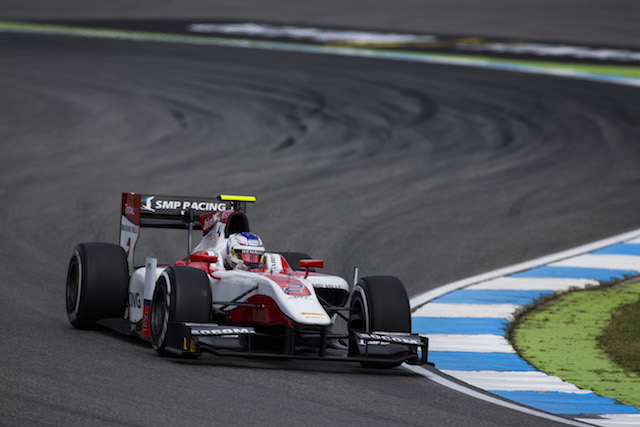 Sergey Sirotkin has taken pole position at Hockenheim for the GP2 feature race.

Oliver Rowland led the pack around the circuit for the first few out laps, but the British driver’s first flying lap of a 1m23.887s was?not up to scratch as he was easily beaten by Antonio Giovinazzi, then Pierre Gasly, and then finally Sirotkin with the Russian driver putting in the fastest time with a 1m22.852s.

Due to the short nature of the track, track position was key to putting in a good lap. Many drivers were putting in purple first and second sectors, only to find drivers warming up for a lap in sector three.

With the second round of flying laps underway, this time it was?Raffaele Marciello putting in a 1m22.369s who would take the top spot off of Sirotkin. Giovinazzi and Alex Lynn also put in a set of good laps, putting themselves second and third on the timing sheets.

As the middle of the session approached, it was track limits that was causing the biggest strife for drivers. Many were suffering from having their times deleted for exceeding track limits at turn 1. This meant?drivers like Marvin Kirchhofer?and Luca Ghiotto who were initially in the top ten to find themselves way down the timing sheet.

Rather than the usual lull that happens during the middle of the session, many drivers took the opportunity to get a lap back on the board after having their times deleted.

With five minutes to go, drivers were setting personal best sectors and jostling around the standings, before finally Sirotkin bounced back, putting in a 1m22.193s to knock Gasly off the top spot. With only a few minutes left on the clock, Gasly exited?his Prema car and with no one else doing any better, Sirotkin’s pole position was secure.

Gasly will start?on the front row while Marciello and Giovinazzi line up together to make an all Italian row two. Rowland recovered to start fifth alongside Lynn in sixth. Norman Nato will start seventh ahead of Nicholas Latifi, Jordan King and Kirchhofer in tenth.