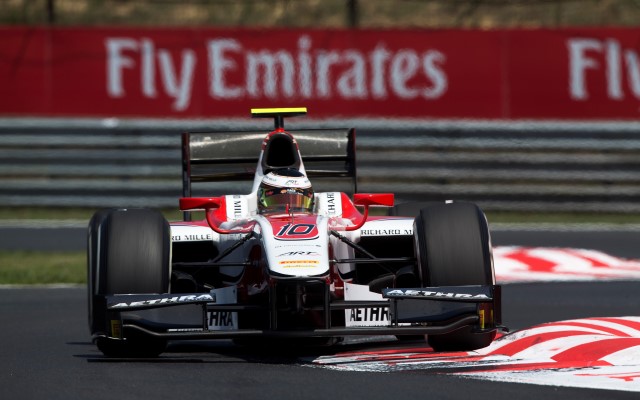 Stoffel Vandoorne set the pace in free practice for the seventh round of the GP2 season at the Hungaroring.

Vandoorne, who has scored four podiums in the last six races, managed a best time of 1m29.479s. That put him 0.061s clear of second-placed Felipe Nasr.

The DAMS duo of Stephane Richelmi and Jolyon Palmer were third and fourth, split by 0.039s. Championship leader Palmer was involved in the most dramatic moment of the session, when Johnny Cecotto locked up at turn two and careered over the front-left wheel of Palmer, who had moved to the outside of the corner to give way. Both suffered front end damage, but Palmer’s car was repaired in time to rejoin the action before the end.

Cecotto, who is under investigation for the incident, finished with the sixth fastest time, behind double feature race winner Mitch Evans. Kimiya Sato was seventh on his return with Campos after missing last weekend’s races at Hockenheim due to a clashing Auto GP event. The Japanese driver won both of the Auto GP races at the Hungarian circuit in May.

Racing Engineering drivers Stefano Coletti and Raffaele Marciello were 19th and 20th respectively, over a second off the pace.