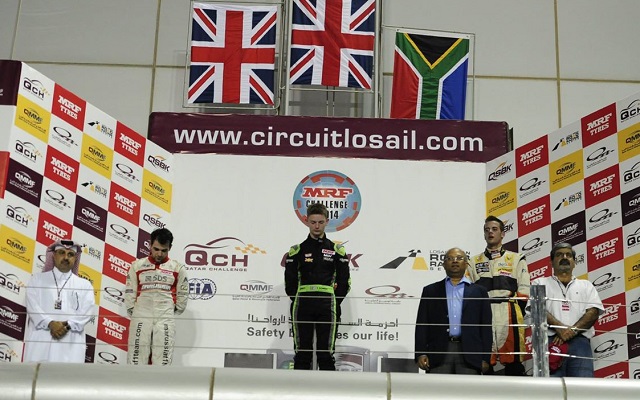 British driver Toby Sowery and Indian driver Tarun Reddy shared the spoils in races one and two of the first round of the 2014-15 MRF Challenge season at Losail, held on Friday.

Vikash Anand and Dylan Young came home in seventh and eighth places. The top ten was brought up by Raj Bharath and Freddie Hunt, both of whom were forced to start from the pitlane after stalling on the formation lap.

Race 2, which was run to a reverse-grid format for the top six, was much closer. Reddy kept the lead at the start, but came under pressure from Mazepin soon. The Russian consistently put pressure the Indian, but despite getting briefly alongside on lap nine, had to be content with second.

Sowery came home third after a stirring recovery drive, having dropped to tenth at the first corner after running wide. He managed to carve his way through the field, and clinched third place by just pipping Mathias Lauda to the line in a photo-finish.