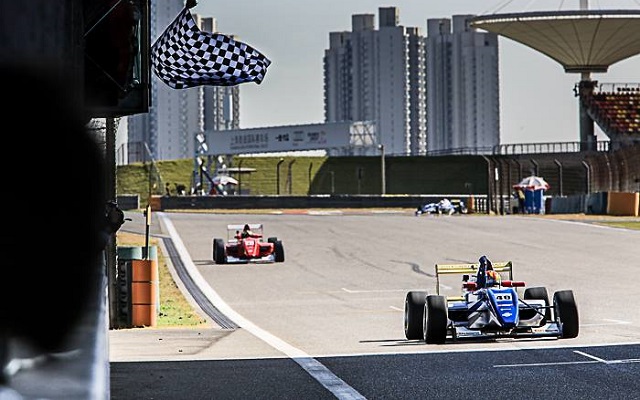 New Zealander James Munro took a step closer to winning the 2014 Formula Masters China Series by winning the first race of the final weekend at Shanghai.

The Kiwi started on pole and managed to maintain a slender advantage for most of the race, winning by 1.3 seconds.

His closest championship rival Matthew Solomon?took no points after pitting at the end of the formation lap due to a gearbox issue, although he did finish the race three laps down.

Australian driver Jake Parsons took a strong second place after starting in fifth, passing teammate Andersen Martono and KCMG’s Dan Wells on the same lap. He tried to cut the gap to Munro, but ended up settling for a podium finish.

Ronald Wu held off Senna Iriawan for eighth, with Yuan Bo being the only Eurasia driver in the top ten.

With two races to go, Munro now has a 27-point lead over Solomon with just 32 up for grabs. The KCMG driver will start on pole for race two as well, having taken the fastest lap in race one.