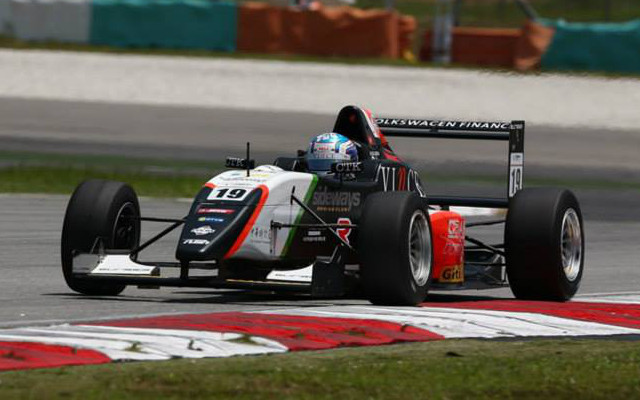 Eurasia Motorsport’s Matthew Solomon won the third race of the fifth round of the 2014 Formula Masters China season at Zhuhai.

The 18-year-old driver from Hong Kong took advantage of a slow start from his teammate Yuan Bo and surged into the lead. He came immediately under pressure from championship leader James Munro, but for the second successive race there was contact, with Munro forced off the track. The Kiwi could only manage 13th at the end.

Solomon’s race was far from straightforward thereon, as he had to hold off the advances of Dan Wells, but the Briton made an error while trying to go for the lead and dropped to third behind Parsons.

The Australian then took up the baton and pushed Solomon hard for the lead, but the Eurasia driver held on and steadily extended his lead to take a relatively comfortable win, ahead of Parsons and Wells.

Sean Hudspeth finished fourth, with Ronald Wu holding off Pu Jun Jin and Andersen Martono for fifth at the line. Polesitter Bo could only manage eighth in his Eurasia. The top ten positions were completed by Tomoki Takahashi and Hua Miao.