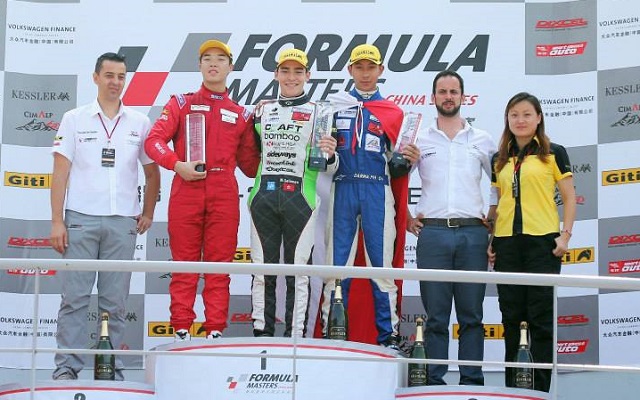 Eurasia driver Matthew Solomon claimed his second consecutive victory of the season in an incident-packed third race of the weekend, in the third round of the 2014 Formula Masters China series season at Inje.

Solomon was third on the grid at the start, behind an all-KCMG front row of James Munro and Dan Wells. Both KCMG cars jumped the start, and then came together at the first corner, with championship leader Munro retiring on the spot and Wells managing to keep his lead.

Wells managed to finish the race in the first, holding off the advances of Solomon, but was given a 30-second time penalty for his jump start, which dropped him down to eighth. Solomon thus inherited the win, with Andersen Martono of Meritus and Darma Hutomo of Humpuss taking their first podiums in the series.

Yuan Bo, having started from the back after picking up a penalty in race one due to his incident with Matthew Swanepoel, charged up to fourth by the end of the race. Swanepoel was forced to retire again after spinning as he collected Akhil Rabindra in the process.

Solomon has slashed Munro’s championship lead to 28 points, with Wells a further 15 points behind.

The fourth race, set to take place this weekend as a replacement for the postponed?third race at Zhuhai, has been further postponed to an unspecified later date.