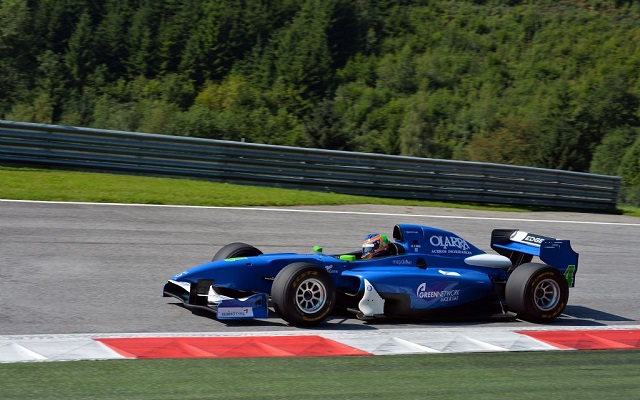 Italian racer Andrea Roda celebrated his maiden victory in the Auto GP series in a high-attrition second race at Spielberg.

Roda finished a few seconds up the road from teammate Tamas Pal Kiss after potential contenders Kevin Giovesi and Kimiya Sato hit trouble in the closing laps of the race.

Giovesi opted to leave his stop late, as in race one, and looked likely to assume the lead after, but his pit stop went completely awry with an issue on the left rear wheel. The Italian returned to the track in fifth and then had to retire when that very same wheel broke off.

On the same lap, bad luck struck championship leader Sato, who was all over Kiss in a fight for provisional second. The Japanese racer endured what looked like a suspension failure and had to pull over, recording his first retirement of the season.

Earlier on, front row starter Christof von Grunigen overtook reverse-grid poleman Michele La Rosa for the lead at the start of the race, but then spun out into Remus on lap two, ending his race prematurely.

As such, with all the issues for drivers around him, Roda calmly drove to the checkered flag, with his Hungarian stablemate completing a Virtuosi 1-2 six seconds down the road.

Michela Cerruti held on to third, narrowly keeping Euronova’s Shinya Michimi at bay despite the latter recording the fastest lap of the race in his pursuit. La Rosa finished fifth, while Salvatore Deplano completed the running order in sixth place.

Giuseppe Cipriani was the chaotic race’s first retirement, crashing out in the first corner of the opening lap.