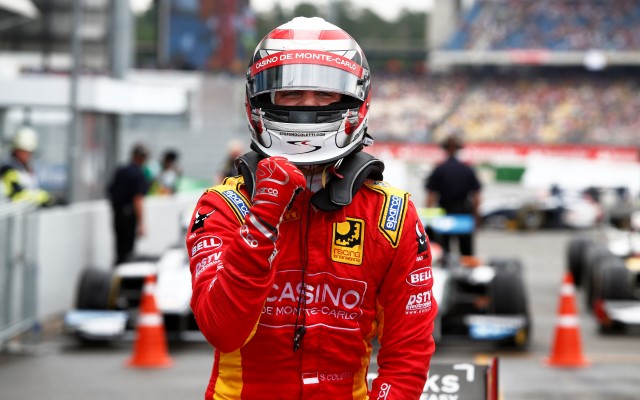 Stefano Coletti scored his first win for over a year in an entertaining wet-dry GP2 sprint race at Hockenheim.

A pre-race downpour meant the action began on a wet track, although Coletti was one of a number of drivers to gamble on starting on slicks, hoping to take advantage if the conditions became dryer.

It was wet-shod runners who hit the front right off the line, with pole-sitter Nathanael Berthon leading feature race winner Mitch Evans. The safety car was deployed at the end of the first lap due to a fire for Stephane Richelmi, following turn one contact with slick-shod front-row starter Johnny Cecotto.

Evans got right up to the back of Berthon at the restart, enabling him to pass the Frenchman into turn two. Under braking for the hairpin, Stoffel Vandoorne went from fourth to second, passing Marco Sorensen and Berthon.

Evans then lost the lead as a result of running wide at turn one and onto the soaking astroturf. While Vandoorne moved into P1, Evans fell to fourth behind Sorensen and Raffaele Marciello. Marciello’s charge from 17th on the grid didn’t last long though, when he nearly tripped over Sorensen under braking and ran through the gravel at the Mercedes-Benz arena. The Italian was stuck in sixth gear, forcing him to retire to the pits as his unfortunate run continued.

The circuit began to dry and come towards the slick runners, leading to Coletti setting the fastest lap and Tom Dillman and Jolyon Palmer pitting from third and fourth to change from wets to drys.

The safety car was then scrambled for the second time to recover the car of Arthur Pic, who had spun exiting turn four after his change to slicks. Vandoorne and Sorensen took their chance to pit for slicks, rejoining only behind Andre Negrao and Daniel De Jong, who were still on wets and would head for the pits after the restart.

Having run the entire race on them, Coletti and Felipe Nasr were more comfortable on slicks than Vandoorne and Sorensen. Vandoorne ran deep at the hairpin, enabling Coletti to get a run on him and take the lead into the Mercedes arena. Nasr soon put pressure on Vandoorne, and although the Belgian did well to keep him behind for as long as he did, the Brazilian eventually got by.

Coletti had by now opened up a decent lead, but Nasr and Vandoorne both began to chase him down, quickly cutting his advantage down to 1.4 seconds. Coletti responded though to remain ahead, demonstrating his pace by stealing the fastest lap away from Nasr on the last lap.

Behind the top three, Sorensen finished fourth ahead of P23-starter Jon Lancaster, who came out on top of a scrap with championship leader Palmer and with one-off Campos driver Alexander Rossi. Adrian Quaife-Hobbs took the final point, with Caterham duo Dillmann and?Rio Haryanto completing the top ten.