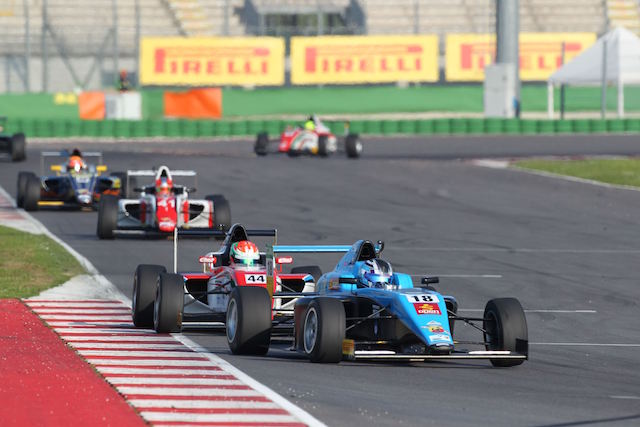 After winning?both of his qualifying heats on Saturday on his debut for Prema, Schumacher failed to get away at first but was?avoided by the cars behind and managed to join the action further down the field.

Somebody who wasn’t avoided after a stall was?Maurizio Baiz, with?Thomas Preining clipping the Mucke car and veering into the barriers on the right-hand-side in avoidance. A safety car was required in order to recover both cars.

In Schumacher’s absence at the front, race three winner?Raul Guzman led at the restart but was unable to pull away from Siebert and – in a reversal of fortunes from race three – he was overtaken by the Argentine, who went around the outside of his rival at Turn 1 to get the inside at Turn 2.

Behind,?Simone Cunati had gone from 10th on the grid to be third after the restart, but he was spun around in contact from?Juan Correa, who was forced to pull off a few corners later with damage.

Correa’s Prema team-mate and fellow single-seater newcomer?Juri Vips?was promoted into third by that incident, and was able to close on the Guzman-Siebert battle and follow the Jenzer driver straight past the DR Racing man.

Vips soon began to attack Siebert,?who had lost a lead in both of his heats after setting the pace in qualifying, but this time was able to pull a gap again. Vips got?back onto Siebert’s rear wing in the last couple of laps, but Siebert held on to win.

Guzman completed the podium after holding off F4 debutant?Kush Maini, who started the final race in 14th, having in turn?gone from 21st on the grid to the top 10 in both his heats.

Just half a second behind the Indian at the flag was Schumacher, who came back from the lower end of the top 20 after the restart. He will lead the standings after the first round, two points ahead of Guzman and seven ahead of Siebert.

Job van Uitert?started third after a strong debut weekend with Jenzer and was in the same position at the restart, but lacked pace and fell to sixth. Third-year Antonelli driver Joao Vieira was seventh ahead of?Valentin Hasse-Clot?of new team KiteViola, while Federico Iribarne?and?Devlin DeFrancesco completed the top 10 from 17th and 19th on the grid.

A week after winning all four French F4 races at Paul Ricard,?Yifei Ye failed to make the cut for the final following his start-line crash in race three.