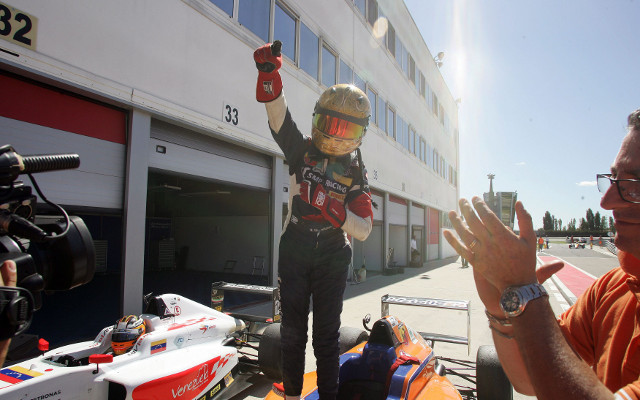 Russian driver Robert Shwartzman charged from seventh on the grid to win the reversed-grid Italian F4 race two at Adria, picking up his first victory in single-seater racing.

Colombian driver Kevin Kanayet started on pole having finished tenth in the first race, and maintained the lead at the start, but there were a lot of position changes behind. Shwartzman and Ralf Aron moved up to fourth and fifth, while Guan Yu Zhou and Moritz Muller-Crepon lost places due to slow starts.

Kanayet was unable to withstand the pressure from Venezuelan Mauricio Baiz and lost the lead on lap three.

After a safety car period, Kanayet later had contact with Marino Sato, pushing the Colombian up onto two wheels and off track.

Shwartzman benefited to move up past Sato into second, while further back, Zhou was recovering from his slow start and managed to pass several cars to move up to sixth behind race one winner David Beckmann at the halfway point.

On the penultimate lap, Shwartzman managed to out-brake the Vincenzo Sospiri Racing driver for the lead, with Sato edging ahead of his teammate at the line to claim second.

Aron soon began to have a re-occurrence of the problems that afflicted him in race one, dropping away from the leaders quickly and forced to defend from the cars behind. Beckmann took his chance three laps from the end, dive-bombing past the Estonian into turn one.

This opened up an opportunity for Zhou, who went round the outside of his teammate, while Swiss racer Nico Rindlisbacher managed to take advantage and nip past Aron as well.

Zhou however, was handed a 25-second penalty due to overtaking a driver under the early race safety-car period. This promoted Rindlisbacher and Aron to fifth and sixth.

Marcos Siebert took seventh, with Brazilian driver Joao Vieira finishing eighth despite starting at the back after his race one crash. Swiss duo Muller-Crepon and Diego Bertonelli completed the top ten.