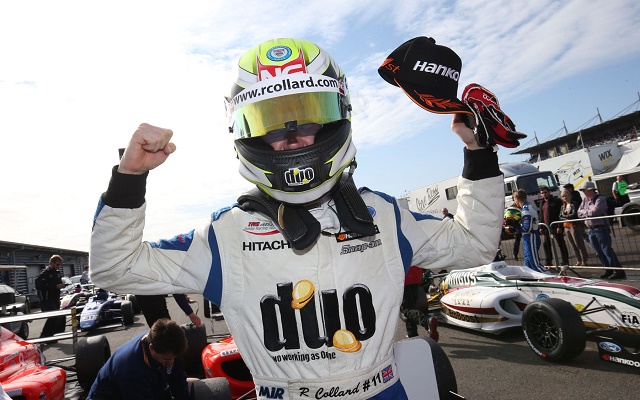 Arden’s Ricky Collard returned to the top spot in the MSA Formula standings after winning the second race of the Rockingham round.

Starting from the front row on the reversed grid, Collard shadowed poleman Sandy Mitchell over the opening lap before passing him on Deene next time around.

Shortly thereafter, Rafa Martins brought out the safety car and Collard would go on to control the race after the restart, banking his fifth win of the season.

Sennan Fielding got past Mitchell for second place, but could not make significant inroads on Collard, settling for the runner-up spot.

Mitchell picked up his first podium since Thruxton, while Matheus Leist worked his way past Dan Ticktum for fourth.

Ticktum in fifth was followed by Enaam Ahmed, while Colton Herta, Lando Norris and Toby Sowery finished within half a second for seventh, eighth and ninth. The top ten was completed by Ameya Vaidyanathan, who recorded his best finish of the season.

Collard now faces an uphill battle to retain the points lead in race three, as he starts at the back and Norris, three points adrift, lines up on front row.