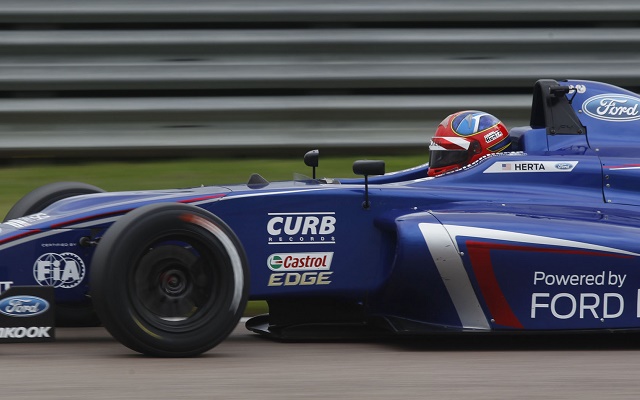 Carlin’s Colton Herta was victorious in MSA Formula race three at Rockingham, leading every lap of the running.

The American held the lead off the line ahead of teammate Lando Norris, while row?two saw Sennan Fielding get a better jump off the line than?Daniel Ticktum, only to run wide at turn one and hit the wall.

Following a short safety car stint, Herta had?no problems at the restart and soon pulled away from the battling duo of Ticktum and Norris, the latter trying to reclaim the second place he lost right before the safety car stint.

He eventually completed the pass on his opponent and started to go after his teammate.

The gap?of four seconds slowly disappeared as the race went on but once Norris got behind Herta, the clock ticked down, not giving him a chance to overtake.

After being demoted to third, Ticktum was under attack from the third Carlin driver of the field, Petru Florescu.

The Romanian was all over the rookie leader but Ticktum managed to stay ahead despite running two seconds slower during the final lap.

Florescu did?not find a way through and had to settle for fifth following a last-lap overtake from Toby Sowery.

Louise Richardson grabbed ninth as the top ten was completed by Josh Smith.