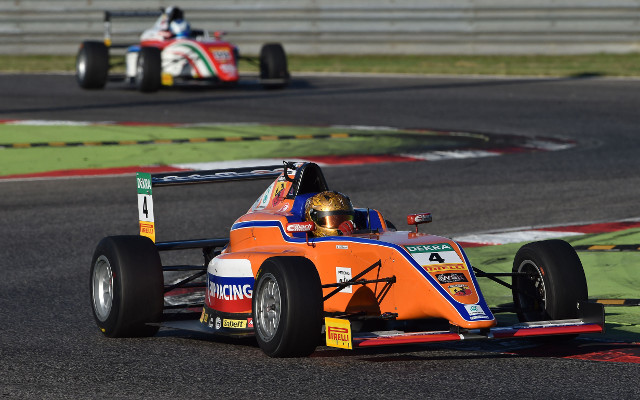 Robert Shwartzman got the second single-seater victory of his career barely hours after his first with a comfortable win from pole position in the final Italian F4 race of the weekend at Adria.

The Russian driver had a strong start and was never headed, winning by over three seconds ahead of championship leader Ralf Aron.

The start saw front-row qualifier Nico Rindlisbacher lose out to Aron and Brazilian driver Joao Vieira. Mauricio Baiz then tried to pass Rindlisbacher as well at the end of the first lap, but the two collided, putting Baiz out of the race and demoting the Swiss driver to 12th.

In the ensuing melee, David Beckmann and Marino Sato lost out and fell back to the tail of the top ten, while Prema drivers Giuliano Raucci and Guan Yu Zhou were the biggest gainers, moving up to fourth and fifth ahead of Kevin Kanayet and Marcos Siebert.

Beckmann soon began undoing the damage by passing Siebert and Kanayet in quick succession, while further up front Zhou moved past teammate Raucci with a slick pass on the inside into turn three.

A train of cars soon began to develop behind Kanayet, which included the recovering Rindlisbacher, who had made his way back up to ninth. A mistake at the final corner saw Kanayet lose out at turn one to both the Jenzer cars of Siebert and Rindlisbacher.

Vieira, running in third place for much of the race, developed a technical snag in the closing stages which slowed the Brazilian, dropping him to 12th at the flag. This allowed Zhou through into third, while at the same time behind them, Beckmann moved past the struggling Raucci.

The trio would go on to finish third, fourth and fifth, ahead of the battling Jenzer duo of Siebert and Rindlisbacher. Kanayet finished eighth ahead of Yan Leon Shlom, while Bar Baruch rounded off the top ten after having started from the back.