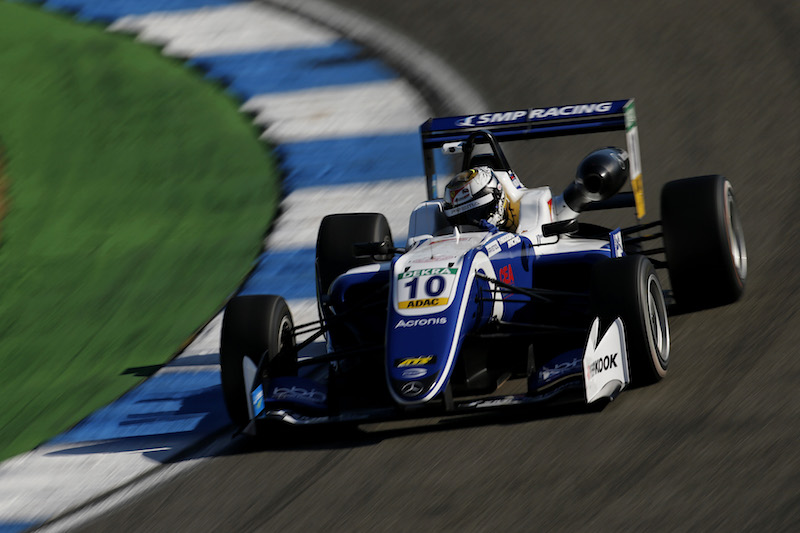 Robert Shwartzman took a dominant win in the final race of the Formula 3 European Championship era at Hockenheim in front of Mick Schumacher, as Dan Ticktum sealed second overall after Juri Vips was turned around on the first lap.

Schumacher, who sealed the championship in race two on Saturday, seemed to make a better getaway than his pole-sitting Prema team-mate Shwartzman, but Shwartzman did enough to stay ahead and then built a good initial gap through the opening corners as Schumacher came under pressure from Vips.

After his race two win, Vips had a good chance of snatching the championship runner-up position from his Motopark team-mate Ticktum if he could finish on the podium, but he was hit into a spin by fellow Estonian Ralf Aron going through the hairpin for the first time and demoted to the back of the field.

Up front, Shwartzman quickly pulled away from Schumacher, finishing up 10.5 seconds clear for his second F3 win.

The Ferrari protege, whose consistency sealed him the rookie title in race one of the weekend, finishes the year third overall ahead of Vips and just 12 points behind the runner-up Ticktum, who finished the finale in fifth from 10th on the grid.

Schumacher spent the first half of the race with a train of cars up behind him, but managed to build a gap thereafter.

Hitech GP driver Alex Palou made good on his strong qualifying form this weekend to score his seventh podium of the year, holding off significant pressure from Aron in the closing stages.

Their battle allowed Ticktum?to close up, together with Guan Yu Zhou and Ferdinand Habsburg, who both passed Jonathan Aberdein late on.

Enaam Ahmed was ninth and Vips fought his way back up to 10th, taking the final point after an intense fight with Sophia Florsch.

Jehan Daruvala sat fifth when he ran wide at the end of lap five, damaging his car over the bumpy gravel trap and forcing him to retire.

Marcus Armstrong failed to finish for the third time this weekend, after having to pit on the first lap with a puncture. It consigned him to fifth in the standings behind Shwartzman and Vips.

Sacha Fenestraz ran into the back of the Vips-Aron clash, costing him his front wing and leading to his retirement.