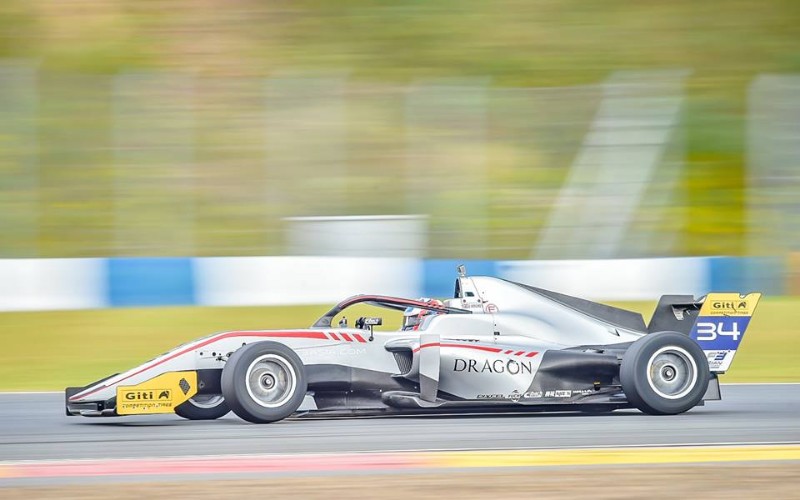 The Briton has a 33 point lead going into the Sepang finale next month, which he will miss due to GP3 commitments.

Conwright looked set to follow that up with a second place in the first race, but a drive-through penalty for a false start dropped him to eighth. He’d made his way up to sixth before a penultimate lap safety car caused by Super License’s Takashi Hata getting stranded on track.

Hughes started from the front again in the second race, and lead another Hitech podium lockout. Hyman and Leong were once again second and third, a considerable distance behind, with Conwright just beating Takahashi to fourth. Kang Ling, a winner in GT racing and a former European F3 driver, finished seventh for ZEN Motorsport.

It was no surprise to see Hughes control the third race too, which started with a lap behind the safety car due to the damp conditions. It wasn’t until the fifth lap that Hyman started challenging Leong for second, and they spent several laps tentatively yet aggressively running side-by-side with one another on the slippery track.

On lap 11 Hyman sent it down the inside of the Turn 1 left-hander, and ended up sliding with oversteer at the exit of the corner. This left him on the outside for the Turn 2 left-hander, where he completed the move before a bit of side-on contact at Turn 3 confirmed the place.

Leong dropped back after the contact, coming into the clutches of Conwright over the last two laps. He managed to hold on to third place, while Hughes relaxed up front to take a 2.238 second victory.

BlackArts Racing’s Louis Prette equalled his best result of the season in an impressive run to fifth, while Takahashi’s gamble to start on slick tyres failed and he ended up putting and finishing a lap down.

Hyman needs only to finish fourth in each of the Sepang races to outscore Hughes, while Conwright can go level with the championship leader if he wins all three races. Either way, a Hitech driver is guaranteed the title, in addition to the teams’ title it has already secured.