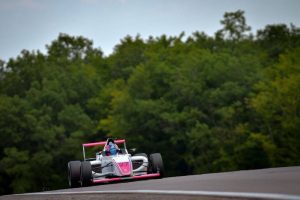 De Wilde was at his most comfortable at the start of the race, making an exceptional getaway from pole and putting a handy gap between himself and second place.

It wasn’t long before he was drawn back in by Pourchaire and Eteki, who were running nose-to-tail at one point.

In the closing laps Pourchaire tried attacking the leader, but then ended up being harassed by Eteki, often the fastest man on track. The latter squeezed through once or twice towards the end, but was only in the position for a few seconds before Junior champion Pourchaire moved back past.

This gave de Wilde some late breathing space, and he met the chequered flag with a 3.295 second advantage. Pourchaire and Eteki were split by just a quarter of a second.

The battle for fourth was relatively calm, despite the large number of cars involved, until the last few laps of the race. Paul Ricard?s plentiful run off meant that mistakes just brought more drivers into play, and champion Caio Collet ended up winning the battle on the last lap.