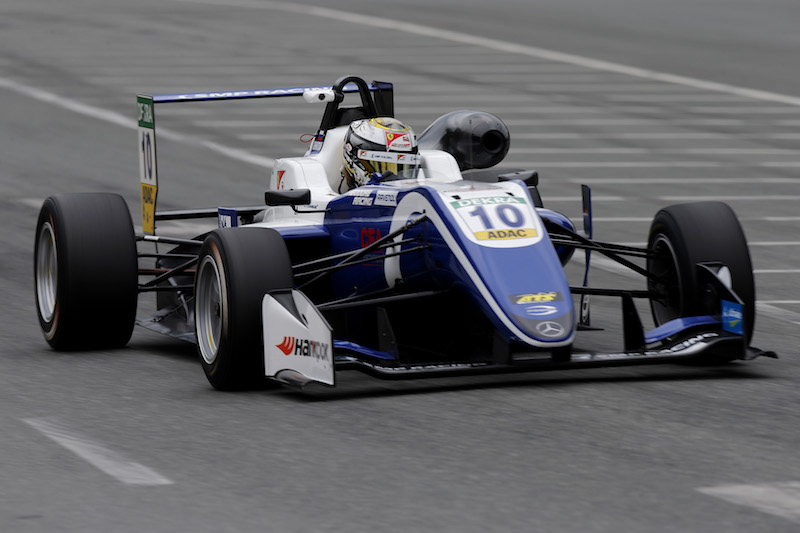 Shwartzman showed improved form to top the first qualifying group with a 48.037-second lap, and then watched points leader Enaam Ahmed come within 0.004s of matching that right at the end of the second group.

Prema driver Shwartzman set his pole-winning lap with two minutes of the first group remaining, responding after Dan Ticktum had displaced him at the top of the times.

Race one winner Armstrong – who as in first qualifying kept his power dry for the end of the session – then set two laps that were good enough for second in the group, and while he fell short of Shwartzman’s time by 0.043s, he did beat Ticktum to the best second-fastest time and race three pole by 0.008s.

“Unexpected, but I think we did a good job, the team especially,” said Shwartzman to Formula Scout. “The car felt good, so I managed to put that really good lap in. A shame about the second fastest lap [which was only fourth best in his group], I just did a small mistake, but I think the improvement is there and I’m happy to do the pole.”

The second group looked set to culminate in a thrilling battle between Juri Vips and unlikely challenger Keyvan Andres,?who was handed his maiden European F3 point from his 37th race by a stewards decision announced just shortly before qualifying.

Vips had topped the times with four minutes remaining, only to then smack the wall exiting Dutzendteich at the end of his next attempt.

With two minutes to go it seemed from the times that the best conditions had passed, with light rain starting to fall, but Andres then pulled out a lap 0.001s faster than Vips’ benchmark.

Incredibly, Vips then responded with a lap that was 0.001s quicker again, before Ahmed then found a further 0.11s right at the chequered flag.

Hitech driver Ahmed had qualified down in 14th for race one, and finished up in the same place after spinning out of ninth.

“We put new brake pads in because I ruined mine when I spun, and it took a long time for them to come in,” he explained to Formula Scout.

“I was really worried during the session because they weren?t getting better. I did a cool-off lap and then they came in for the last two laps.

“I always knew we had pace in the dry because in free practice I was the top Mercedes in the times, but then we made completely the wrong call with downforce and put far too much on for [wet] qualifying yesterday.”

Vips and Andres will join Armstrong and Ticktum on rows two and three respectively for race two, with Ferdinand Habsburg to start next to his Carlin team-mate Jehan Daruvala on row four.

Motopark’s Vips moves up to the front row alongside Armstrong for race three, with second in group two’s second-fastest times (and fourth on the grid alongside Ticktum) going to Guan Yu Zhou, who was only sixth best in the group outright.

Ahmed will start race three in sixth next to Daruvala, with Shwartzman joined on row four by Alex Palou.

After their success in the first group, Prema struggled in the second, with Ralf Aron and Mick Schumacher ninth and 10th fastest outright, and seventh and 10th on second-fastest times.

Julian Hanses was just behind Schumacher in 11th but fortunate to set a time at all after he lost control on the pit straight warming his tyres early on.

As his car spun off to the left, the ma-con driver just managed to bring it under control with the rear of his car in a gap between the barriers.