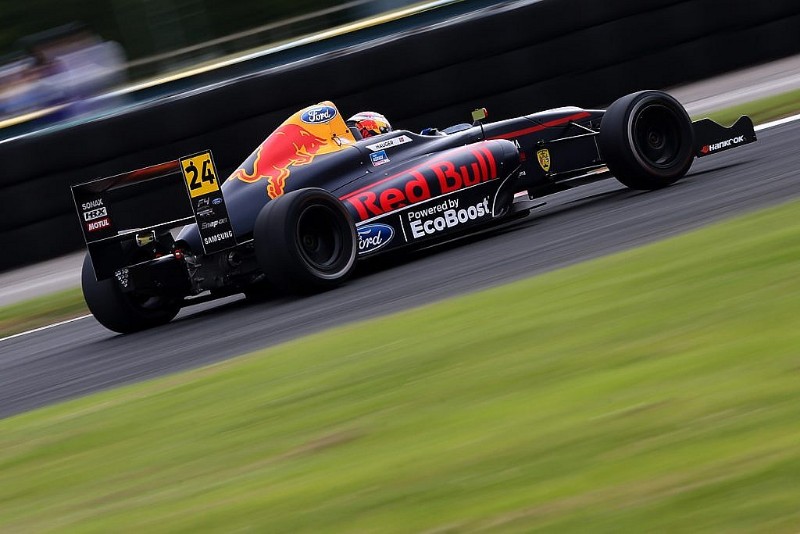 Dennis Hauger converted pole into his second British Formula 4 win of the season in the opening race at Croft, holding off championship leader Kiern Jewiss.

Hauger went unchallenged into Clervaux, and from then on only saw glimpses of an attack from Jewiss. The lead fluctuated between three and eight tenths of a second, with Jewiss choosing not to replicate his late race move on Hauger from Oulton Park that went penalised, and instead extended his points lead with a safe second.

Nobody else could match the pace of the top two, with Hauger’s Arden team-mate Patrik Pasma overtaking Jewiss’s Double R Racing team-mate Paavo Tonteri for third at the start and then lapping on his own for his fourth podium of the season.

Tonteri finished fourth, meaning Pasma is now ahead of him by one point in the battle for fifth in the standings.

JHR Developments’ Ayrton Simmons was close to Tonteri by the end of the race, but looked unlikely to finish any higher than fifth and saw the gap to Jewiss in the standings extend to 24 points. His only positive is that for the reversed grid second race of the weekend he will be starting in front of his title rival.

Hampus Ericsson (Fortec) and Seb Priaulx (Arden) completed the points, although both looked to be slower than Sharp Motorsport’s Jamie Sharp, who like everyone else was unable to overtake and ended up a pointless 11th.

Jack Doohan lost third in the standings to team-mate Hauger, although keeps his Rookie Cup lead, after retiring at the end of lap one with mechanical problems.